Hanwha shows off its weapons at London expo

Hanwha shows off its weapons at London expo 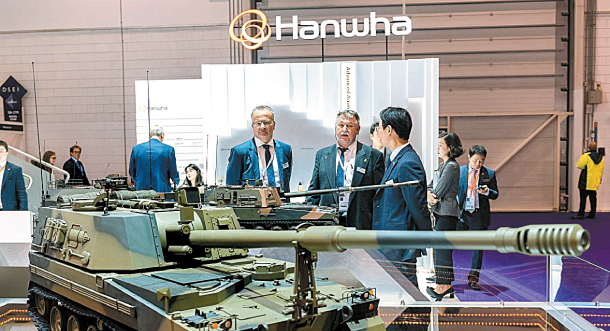 A mock-up of the K9 self-propelled howitzer painted in British army colors is displayed in the Hanwha booth during the Defence and Security Equipment International 2019 exhibition held from Tuesday through Friday in London. [HANWHA GROUP]

Hanwha Group’s defense affiliates are taking part in one of Europe’s largest defense exhibitions in London through Friday to bolster their presence in the European market.

According to Hanwha Group Wednesday, three of its affiliates - Hanwha Corporation, Hanwha Defense, and Hanwha Systems - jointly opened up a booth at the Defence and Security Equipment International (DSEI) 2019 held from Tuesday to Friday.

The biennial exhibition, marking its 20th year, brings together some 1,600 companies from 69 countries.

Hanwha’s booth is the largest in size among the Korean firms participating in the exhibition, it said. Its main products on display include K9 Thunder self-propelled howitzer and Redback infantry fighting vehicle.

The British ministry plans to introduce the Mobile Fires Platform into service from 2026.

Hanwha said it will offer a self-propelled howitzer that most aligns with the specs requested by the British army based on technologies it is co-developing with the Agency for Defense Development in Korea.

“Hanwha has proven its technologies and project execution capabilities in the global market through exports to European countries like Finland and Norway,” said Hanwha Defense CEO Lee Sung-soo.

“We will continue to promote Hanwha as a trustworthy partner for diverse business opportunities including the one proposed by the British army to adopt new self-propelled artillery.”