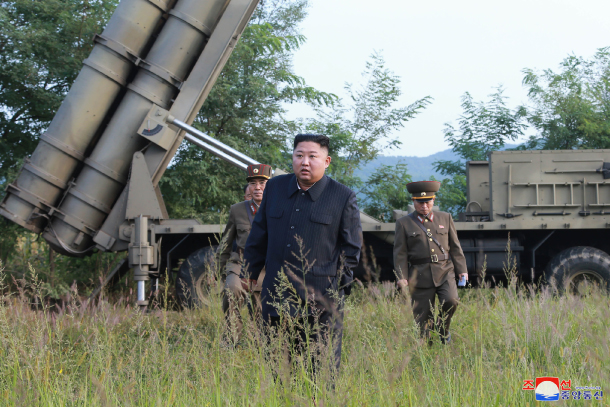 North Korea on Wednesday said its weapons test a day earlier again featured a “super-large” multiple rocket launcher, but no mention of success suggests the test did not meet the regime’s expectations.

According to an English-language report from the official Korean Central News Agency (KCNA), North Korean leader Kim Jong-un personally guided the launches of two rounds from this new type of rocket launcher, which the report said “was in full line with its purpose and served as an occasion to clearly decide the next-stage orientation to complete the weapon system.”

Kim noted that the weapon system “has been fully verified in terms of combat operation, the characteristics of trajectory, accuracy and precise homing functions,” but added that “what remains to be done is running fire testing which is [the] most vivid character in terms of the power of the rocket launcher.”

While both the Korean and English reports on the test said it had fulfilled its purpose, the omission of references to success and hints of necessary further testing imply the projectiles failed to hit their intended target or proved less promising than earlier expectations.

Shortly after detecting the launches on Tuesday, South Korea’s Joint Chiefs of Staff said two projectiles were fired from an area near Kaechon, South Pyongan Province, with at least one of the rockets flying a distance of 330 kilometers (205 miles). While no definite determinations have yet been made, the lack of precise information on the other rocket raised the possibility it may have failed mid-flight.

Footage released by the KCNA from the test showed what appeared to be artillery rockets fired from transporter erector launchers (TEL) which looked identical to the system displayed by the North on Aug. 24 when the North last said it tested this “super-large multiple rocket launcher.”

The weapon is believed to be the fourth type of novelty armament developed by the North as part of its recent drive to bolster its conventional arms, along with a domestic variant of the Russian-made Iskander ballistic missile, called KN-23 by the United States and South Korea; tactical missiles akin to the U.S. MGM-140 Army Tactical Missile System, or Atacms; and another multiple rocket launcher system with a shorter range and peak altitude. All these weapons were tested in a series of nine tests conducted by Pyongyang since May, with Tuesday marking the 10th weapons test this year.

Sources within the South Korean government say at least one of the projectiles launched on Tuesday could have fallen mid-air while flying a significant distance overland from Kaechon to the East Sea. A military official in Seoul said while only two launches were detected, the North may have tried to fire three projectiles with one failing to launch, according to photographs after the launch that showed covers left on only one of the four launching tubes on the TEL.

Nevertheless, the Rodong Sinmun, North Korea’s party mouthpiece, said Kim would continue to put efforts into the production of new weapons and “breaking through the cutting-edge in the field of national defense science.”

Kim was also accompanied by a variety of key military and munitions officials for his supervision over the test, including Pak Jong-chon, the artillery commander recently appointed chief of the country; Ri Pyong-chol and Kim Jong-sik, two senior officials of the Munitions Industry Department who reportedly played instrumental roles in advancing the country’s missile program in recent years; and cadres from the Academy of National Defense Science, the agency responsible for developing the North’s intercontinental ballistic missiles.