The interactive media work by Dot-mill, which sits in the first exhibit space of the Gwangju Biennale Exhibit Hall in Gwangju, shows motion images of people moving, which also change according to the movements of the viewers in the scene. [JEON TAE-GYU]

If the broad theme of the 2019 Gwangju Design Biennale doesn’t ring a bell for you, don’t worry - you’re not the only one.

The biennial event began on Sept. 7 and is being held through Oct. 31 in Korea’s southern city of Gwangju under the theme of “Humanity.” While the word “Humanity” takes on the literal meaning of the word, it’s also a combination of the words “humanity + community” according to the Lee Gil-hyung, the general director of the biennale and the President of Korean Federation of Design Associations.

“The theme of the Gwangju Design Biennale was ‘Futures’ in 2017,” said Lee prior to the opening of the Biennale. “If through that theme the biennale sought to show the future society in which design is enhanced by the future technology, this year’s theme looks at the role and value of design for humanity. By looking at what design means, we hope to suggest a better future for humanity.”

The five sections inside the main exhibit begin with a welcoming installation outside the Gwangju Biennale Exhibition Hall building, where gigantic plastic balls containing green grass stand like street lamps, titled “Oneness Garden.” From then on, five different sections each put together by different curators await the guests.

The first exhibition, curated by Lee Dong-young, begins with the title “Humanity and Design,” where four design-slash-modern-art works start off the biennale by posing the question of how to define humanity in this era. It follows through a narrative, starting with Yiyun Kang’s “Lucid Dream,” with which people think about themselves, how they live in this world half-asleep or half-awake while walking through the 25-meter tunnel surrounded by soft fabrics that play unfathomable video images. The second work by Dot-mill is an interactive media art work that shows the motions of people walking, while the images change according to the different movements shown by the visitors at the exhibit. 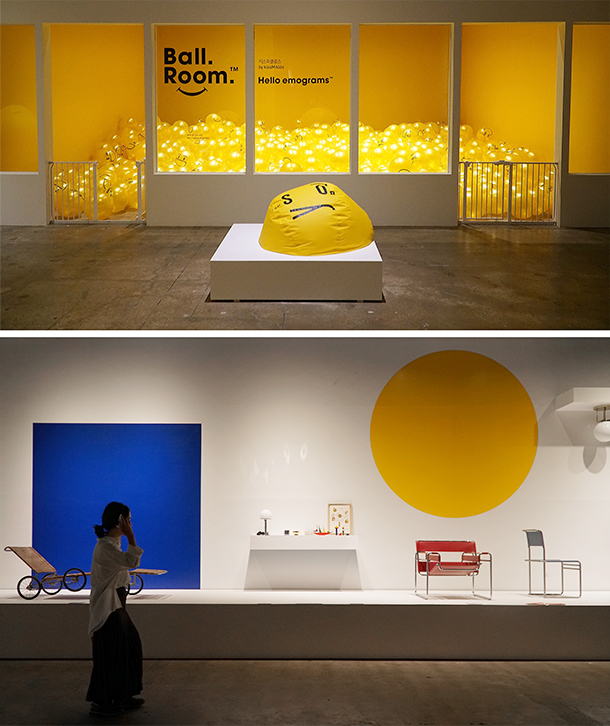 From top: “Ball Room” by Kiss Miklos expresses how people share their emotions through emojis; the Bauhaus display at the second exhibit [JEON TAE-GYU].

The third work “Emograms” and “Ball Room” by Kiss Miklos will be “the most photo-friendly zone for people to upload to their Instagram,” according to curator Lee, which looks at how people can communicate with each other through emojis that represent their inner thoughts. Even though being “photo-friendly” might not be the ultimate goal of a design biennale, it certainly does make for great pictures. The fourth piece, “Lotus Dome,” is by Daan Roosegaarde. Though the work may actually fit better at an architecture exhibition, the dome-structured installation invites the visitors to touch the works to see how light blooms with their very own body temperatures and think about how a community is run and maintained by people sharing their warmth.

The second exhibit, curated by Kang Seung-min, focuses on the 100th anniversary of the Bauhaus Design School as well as displaying works by international designers. Although there are no original furniture or design pieces made during the Bauhaus movement at the exhibit, other art works by teams in and outside of Korea show the ways in which Korean design were influenced by the monumental design school and still continues to do so to this day. The third and fourth exhibits display design works by various industrial companies including Kia Motors, finishing with the last section in which designers based in Gwangju get to show their very own products, funded by the Gwangju Design Center.

Yet, it remains to be seen whether the Gwangju Design Biennale truly kept to its theme, or chose the broadest possible one to make sure they could include anything that was related to human beings. While director Lee explained that “Humanity” was chosen as the theme to take a look at the role of design as a tool to solving social problems and ultimately revisit the meaning of design without the industrialized aspect, design critic Choi Bum explained that “Humanity” as a theme was too broad to be used for a design biennale, which ultimately conveys no message at all. 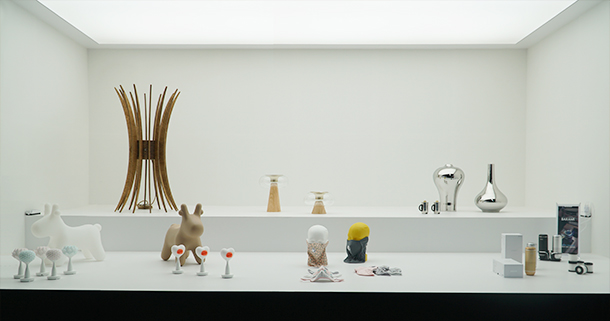 Products by designers based in Gwangju featured at the last exhibit of the biennale hall. [JEON TAE-GYU]

“When your hear the theme, ‘Humanity,’ it doesn’t say anything - it’s too flat. It may go well with the Gwangju city slogan, but other than that, it has no meaning to it. Basically, the Gwangju Design Biennale takes the name of a biennale, but it’s more like another regional event,” he said.

He added, “It’s hard to think that they had neither the knowledge nor the will to delve deeply into the meaning of a biennale.”

For those who decide to head down to Gwangju, make sure to visit the Gwangju Design Center for the special “Dive into Light” exhibition. The exhibit includes an archive of the past design biennales held in Gwangju.

Information for other programs are on the official website, www.gdb.or.kr