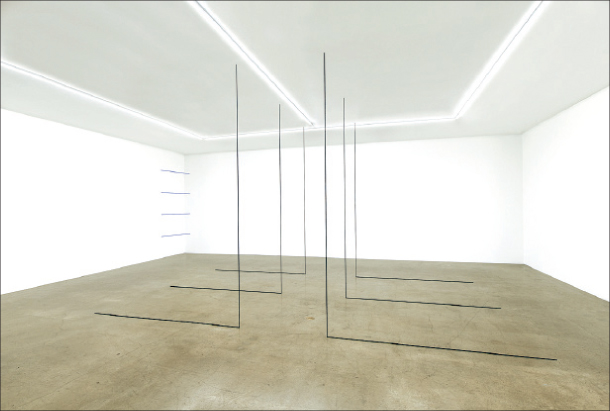 Through Oct. 6: Walk into the visual magic by U.S. sculptor Fred Sandback (1943-2003), where the whole room is divided into paths and geometric shapes with nothing but thin strings easily bought at nearby marketplaces.

When walking into the gallery, visitors will first be confronted by “Untitled (Sculptural Study, Six-part Right-angled Construction)” (1976/2013), where multiple L-shaped black strings stand in the middle of the hall.

Visitors are encouraged to walk around and in and out of the work to fully appreciate how the work changes and how the room changes according to the different angles they see it from. It’s all about moving around and enjoying the visual surprise, not thinking too deeply about the conceptual ideas that are usually embedded within contemporary artworks.

Admission is free. Get off at Anguk station, line No. 3, exit 1 and walk 10 minutes.

Through Nov. 3: This exhibition celebrates King Jeongjo (1752-1800), who has served as inspiration for countless Korean films and books with his progressive social reforms and landmark projects like the Hwaseong Fortress in Suwon, Gyeonggi. The show features 10 contemporary artists’ brand new paintings, installations and video works inspired by Jeongjo and the Hwaseong Fortress, including paintings by Min Joung-ki, the artist behind the famous “Mount Bukhan” painting featured during last year’s historic inter-Korean summit.

Through Nov. 9: Cosmetics company-run Coreana Museum of Art is bringing together works on the topics of youth, ageing and generations by artists from different walks of life in its latest exhibition.

On show are 20 video, photography and installation works by 13 Korean and international artists and teams including well-known feminist artists like Marth Wilson and Sanja Ivekovi?.

Five of the participating artists are over 60 years old.

The works speak on the pressure to look young for people of all ages across both genders and also touch on the generation gaps caused by misunderstanding. A roller skate rink within the museum is intended to help visitors feel their youngest and think back to days of their youth.

Tickets are 4,000 won for adults and free for visitors over 65 and under seven. The museum is closed on Sundays. Go to Apgujeong Station, line No. 3, exit 3 and walk for 10 minutes.

The entry fee is 10,000 won and 3,000 won for students. The museum is closed on Mondays. Go to Gyeongbokgung Station, line No. 3, exit 3 and walk for three minutes.