Back on the mound after skipping a turn in the rotation, Ryu Hyun-jin was back to his old self.

Ryu threw a two-hit gem over seven shutout innings against the New York Mets at Citi Field in New York on Saturday, sitting down his last 13 batters to engage the Mets’ ace Jacob deGrom in an impressive duel. 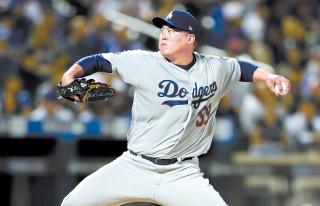 Los Angeles Dodgers starting pitcher Ryu Hyun-Jin delivers against the New York Mets during the fifth inning of a game on Saturday in New York. [AP/YONHAP]

Ryu, who was lifted after seven innings with the score tied at 0-0, didn’t factor in a decision in the Dodgers’ 3-0 loss. Ryu remained at 12-5 while lowering his major league-best ERA from 2.45 to 2.35. He struck out six and didn’t walk anyone.

It was Ryu’s first scoreless start since he twirled seven shutout frames against the Arizona Diamondbacks on Aug. 11.

DeGrom, the 2018 National League (NL) Cy Young Award winner, held the Dodgers to just three hits himself and sat down 16 batters in a row in one stretch. He’s 9-8 with a 2.61 ERA this season.

Ryu and deGrom entered the contest as potential Cy Young contenders for this season, though deGrom had been pitching better of late and Ryu had given up 21 earned runs in his 19 previous innings covering four starts, as his ERA ballooned from 1.45 to 2.45.

With Ryu having suddenly lost his command, the Dodgers decided to have him work on his mechanics in the bullpen rather than have him start on schedule against the Baltimore Orioles on Wednesday.

Ryu opened the game with a clean first inning, and he pitched around a two-out single by Robinson Cano in the second inning.

Amed Rosario hit another single with two outs in the third, but the Mets didn’t manage anything else against Ryu.

Rosario turned out to be the last base runner that Ryu allowed in this outing, as the left-hander retired 13 consecutive batters before handing the reins over to the bullpen.

The Mets barely threatened Ryu, getting only soft contact after soft contact. There was a groundout, a pop out and a strikeout in the fourth. Ryu needed only eight pitches to retire the side in order in the fifth. DeGrom tried to bunt for a single to lead off the sixth, but catcher Russell Martin threw him out and Ryu had a strikeout and a fly out to wrap up that inning.

After getting Jeff McNeil to ground out to short, Ryu struck out his last two batters of the game, Pete Alonso and Wilson Ramos, to cap off his best start in more than a month.

The Mets scored three runs against the Dodgers’ bullpen in the eighth and held on to win 3-0.