Airbnb opens the door for a new kind of tourism

Airbnb opens the door for a new kind of tourism

From left: A lodging listed on Airbnb in a rural neighborhood on Jeju Island. Tea is served to customers at the Chuidasun Resort Tea & Meditation in Seogwipo, Jeju last month. Actors pose during a play as part of the dinner show “Haenyeo’s Kitchen” last month. [KO JUN-TAE, AIRBNB]

JEJU ISLAND - A few years ago, Lee Eun-hyung quit her job as a web designer in Seoul and moved to Jeju Island to start a new life away from the big city.

She initially took a three month-long vacation to the island after handing in her resignation letter, but quickly realized that’s where she wanted to be. Lee packed up her stuff in Seoul and flew back to Jeju to buy a house in Jongdal-ri, Jeju.

“I was originally going to come to the island after reaching 60, but that brief stay changed every part of my plan,” Lee said. “I wanted to completely stay away from the web designing industry, so I jumped into the accommodation business.”

Since 2015, the 40-year-old former web designer has run a bed and breakfast business and sought to offer her home as a place for tourists. She advertises her place on the portal site Naver and registered herself as a host on Airbnb. 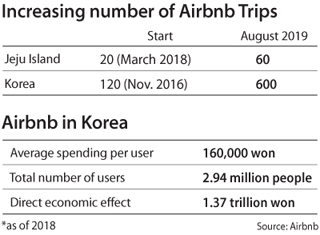 The guesthouse, which can house up to five people, is definitely not a five-star hotel. Yet such accommodation is exactly what many travelers look for when they go on trips these days, echoing a larger shift in Korean tourism in recent years.

While some tour agencies and vacation spots suffer as tourists’ preferences change, Airbnb is one company that has actually benefited from the trend.

Unlike the past, going on vacation these days no longer means visiting incredibly popular tourist spots and sipping on expensive wine while going on pre-set group tours. Instead, Koreans nowadays prefer taking every opportunity they get to go away, often traveling on their own and not necessarily to incredibly well-known places, according to big data analysis from the Korea Tourism Organization last year.

Situated inside a small rural village next to cabbage fields and a couple of restaurants that are only open until 9 p.m., Lee’s place is more like a traditional Jeju home than a hub for tourists. The inside is very retro and offers a cozy warmness with cutesy furniture and decorations. 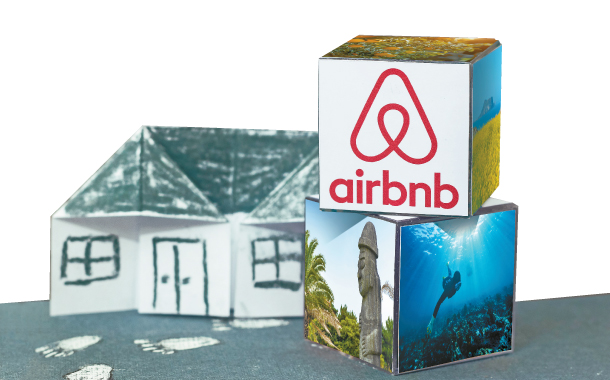 The residence, which normally only welcomes female guests, is priced at 40,000 won ($34) per night for individuals and 160,000 won for those seeking to rent out the entire house. The house was briefly open to male guests during an Airbnb-sponsored trip to the island last month.

Lee said that her place is booked for more than 300 days of the year on Airbnb, and most of her customers either come alone or in small groups. Most of those guests visit her guesthouse to find a quiet place to relax with absolutely nothing on their minds.

“Most of my guests are women in their 20s and 30s trying to find a comforting place to console themselves,” Lee said. “I talk with my guests often, and they tell me that my guesthouse appeals for offering an experience totally different from staying at luxurious resorts.”

Such changes to the tourism culture and related industries are occurring as the number of single-person households increase, the Korea Tourism Organization reports.

According to Statistics Korea, the number of one-person households reached 5.79 million last year, making up 29.2 percent of all households in Korea. The proportion is expected to pass 30 percent by next year.

Those single-person households are no longer looking for activities on set schedules. Instead, they like to pack up their bags and travel freely, which has hurt the profit levels of many local tour agencies.

Those sole travelers are also less inclined to spend their vacation days at popular spots. According to Gangwon provincial government, the number of visitors to its 93 beaches until August this year reached 12.2 million, down 12.2 percent from the 13.9 million a year earlier.

The number of visitors to the popular Haeundae Beach in Busan until mid-August also dropped around 10 percent to 9.42 million.

While the established tour agencies may have lost out, this trend has worked in Airbnb’s favor.

The number of Airbnb users in Korea reached 2.8 million last year, sharply up 56 percent from 1.9 million a year earlier. At the moment, there are more than 6 million Airbnb listings in 100,000 cities around the world, a huge difference from the 1.33 million Marriott hotel rooms, one of the largest accommodation businesses in the world, for example.

Airbnb declined to reveal its sales and profit figures in Korea citing internal policies, but the increasing number of users shows that the service is definitely finding success here.

An Airbnb spokesperson said that one of the reasons the company sees success in Korea is that it allows hosts providing unusual experiences to list their accommodation on the platform.

One such unconventional host is Ahn Dae-jin, owner of Chuidasun Resort Tea & Meditation in Seogwipo, Jeju. Having learned the beauty of drinking tea and meditating from followers of Indian spiritual leader Osho Rajneesh at the Osho Meditation Resort, Ahn opened his resort in October 2018 and has already hosted hundreds of guest looking for a healing experience away from traditional hotels and beach resorts.

While prices differ throughout the year due to the increasing popularity of the resort, it usually costs visitors 125,000 won per night. Each stay comes with breakfast, a meditation class at dawn and various tea drinking courses that can be scheduled upon request.

“Drinking tea helps you calm down, and meditation also helps you become true to yourself,” Ahn said while drinking tea with reporters last month. “I learned so much from India, and with the purpose of sharing my lessons with those coming to Jeju Island, I opened the Chuidasun Resort with my family.”

Four tea rooms located on the basement level of the resort are decorated with traditional wooden furniture and plant garnishes that almost require visitors to relax and stay silent as if they are already meditating. The smell of incense throughout the hallway opens guests’ hearts to the peaceful, spiritual journey.

Going for the experience

While Airbnb gets its name from the abbreviation for “bed and breakfast,” the company does much more than just connect accommodation owners and tourists.

Since late 2016, Airbnb has also offered a service dubbed “Experiences,” allowing travelers to book activities through the Airbnb platform. Just as people buy tickets for amusement parks and admission to national parks, Airbnb is allowing its hosts, some with their own small-scale businesses, to offer experience-based tourist activities online.

One such host is Kim Ha-won, an actor who was born in a family of haenyeo, the female divers of Jeju Island. In a bid to help the declining number of haenyeo finance themselves, she launched an Experience named “Haenyeo’s kitchen” inside an abandoned fisheries bazaar on the eastern corner of Jeju Island.

During an hour and a half-long dinner show priced at 42,900 won per person, Kim leads a troupe of young actors performing small but impactful tales of real haenyeo.

Every show features a different story, and during my visit to the kitchen last month, Kim and another actor told the tale of how one haenyeo drowned after losing her husband.

In an authentic Jeju accent with poetic dance moves, the two actors dressed like 1980s haenyeo cried their hearts out while delivering the heartfelt story that most people would not easily relate to on paper.

But the play is not the only event included in the 42,900 won ticket. Following the performance, real haenyeo come to the stage and introduce local seafood and ingredients, which are served on black ceramic plates moments later.

The show concludes with haenyeo answering questions from the audience who have just finished their dinner.

Airbnb said Haenyeo’s Kitchen is one of the most popular Experiences it currently has listed on Jeju Island, partly because of its already high ratings and numerous reviews. The dinner show exhibiting traditional Jeju culture is rated at 4.9 stars out of 5 on the platform and its review page is filled with positive comments from more than 70 people who visited the event.

Yet Haenyeo’s Kitchen is not the only Experience available on Jeju Island, as Airbnb currently has more than 60 different experiences offered by Airbnb hosts in the area.

Starting with 500 Experiences in 12 global cities including Seoul, the company now has more than 30,000 experiences available in 1,000 cities around the world. In Korea, Airbnb currently lists more than 600 Experiences, with 10 percent of them on Jeju Island, the second area the company picked to expand the service to in Korea.

The online tourism platform said it is also expanding its Experience segment as a means to promote sustainable tourism helping local communities.

Although Jeju Island is one of the most popular vacation spots for Koreans, Airbnb says the area has been heavily damaged from the “Over-tourism” phenomenon, characterized by abundant trash, heavy traffic and conflict with local residents.

“Our Experiences from local hosts provide ways for tourists to travel around Jeju Island in a way that doesn’t damage the lives of ordinary residents,” an Airbnb spokesperson said.

“On top of that, our hosts can offer not-so-well known travel tips and restaurants for their guests, which can also stimulate the local economy.”

As the spokesperson said, every host I talked to offered his or her own list of places to visit, while freely engaging in conversations, even outside set interviews.

Some of them were even selling hand-made merchandise like hats and pottery, which could be suitable and unique gift options for visitors who want something to take back home.

Not a perfect solution

But it’s not like Airbnb is the perfect solution for all tourism activities, as the lodging-sharing platform has also courted controversy as accommodation business owners can work through Airbnb to evade taxes and operate illegally.

In June this year, the Ministry of Culture, Sports and Tourism collaborated with the Ministry of Health and Welfare to inspect more than 1,000 lodging businesses including many listed on Airbnb for possibly operating businesses illegally. The investigation came about after accusations that Airbnb hosts were not properly registering accommodation businesses and failing to follow hygiene and safety guidelines. The results of the investigation have not been revealed.

Airbnb responded that it has also increased its surveillance to find illegal hosts and take them off its platform, but many have criticized that as Airbnb is a foreign business, it has continuously avoided legal responsibility in expanding its service in Korea.

Unlike traditional accommodation businesses, Airbnb allows hosts to register their properties merely with pictures of the places. Although current regulations do not allow studios and bedrooms to be listed as lodging, many of the listings seen on the platform today clearly are those small-size residences that are not legally permissible.

Moreover, the platform is blamed for further damaging the local accommodation industry. According to the Korea Institute for Industrial Economics & Trade in 2015, the average survival rate for an accommodation business for five years after its launch was at 17.9 percent, around 20 percentage points lower than the rate for the manufacturing industry.

As Airbnb reportedly dominates more than 90 percent of the shared lodging market in Korea, the U.S. start-up has been shaking up the local tourism industry and is believed to have caused many businesses to shut down.

With the overall tourism culture evolving and transforming, Airbnb boasts strong performance around the world, including in Korea, while many traditional businesses falter. As the company rigorously expands beyond the realm of connecting accommodation owners and tourists to allow its users to sell and buy experiences and activities, the platform continues to grow.

Yet the platform isn’t exactly popular in the industry, as it continues to allow hundreds of hosts to illegally make money and evade taxes through its online platform, undermining legal, registered businesses.