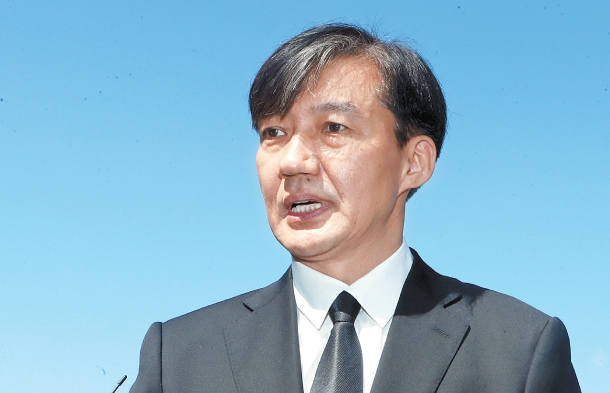 Justice Minister Cho Kuk speaks to reporters on Saturday after paying respects to the late junior prosecutor Kim Hong-young at his tombstone in Busan Memorial Park. Kim took his own life in 2016 at the age of 33, citing work stress. [YONHAP]

Justice Minister Cho Kuk’s first cousin once removed was arrested on Saturday at Incheon International Airport immediately upon his return to Korea as prosecutors zero in on suspicious investments made by Cho’s family.

The relative, only identified as a 36-year-old man also surnamed Cho, was arrested on Saturday morning as soon as he arrived from the Philippines and was transferred to the Seoul Central District Prosecutors’ Office in Seocho District, southern Seoul, for questioning. Prosecutors had been waiting to place him under physical detention on allegations of violating the Act on the Aggravated Punishment, etc. of Specific Economic Crimes, specifically by gaining 500 million won ($424,000) or more through embezzlement. More crucially, prosecutors believe the relative was the mastermind behind hefty investments made by Cho’s wife and two children.

During a press conference early this month, the justice minister said he knew nothing about the family investments and that his wife was only taking advice from his first cousin once removed, who’s an “investment expert in the family.” Cho, however, tried to distance himself when asked about his connections to that relative, saying he only sees the relative once a year.

The relative had fled to the Philippines last month after the justice minister’s scandal arose. Cho and prosecutors had asked for him to return to answer questions.

Shortly after the relative was taken into custody Saturday, two businessmen linked to him were also summoned for another round of questioning after a local court struck down the prosecution’s request to detain them before trial - Lee Sang-hoon, 40, CEO of Co-Link Private Equity (PE) and a 54-year-old man only identified by his surname Choi, CEO of Wellscnt.

A judge at the Seoul Central District Court ruled last Wednesday there was no need to detain them because they mostly acknowledged the facts related to the allegations against them, as prosecutors seemed to have collected enough evidence related to those suspicions and because the two men did not play a pivotal role in the alleged criminal acts, based on evidence submitted by prosecutors.

Prosecutors believe it’s Cho’s first cousin once removed who played that pivotal role and who is suspected to be PE’s actual owner.

Cho’s snowballing scandal did not stop President Moon Jae-in from formally tapping him as justice minister on Aug. 9, a move met with criticism from opposition lawmakers and college students nationwide.