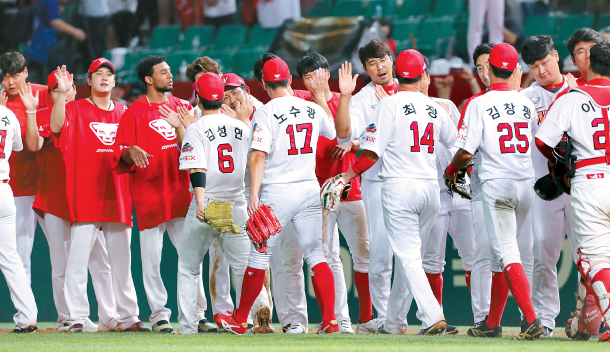 The SK Wyverns celebrate after winning a game against the NC Dinos at Munhak Baseball Stadium in Incheon on Sept. 3. [YONHAP]

The SK Wyverns inched closer to the 2019 pennant title over the Chuseok holiday, with less than two weeks remaining of the regular season.

The Incheon team had a dramatic weekend.

On Saturday, the Wyverns managed to walk away with a 7-6 victory over the Doosan Bears after Bears pitcher Bae Young-soo balked in the ninth inning with runners at first and third and the score tied at 6-6. In baseball, a balk is an illegal act by the pitcher. Under KBO regulations, if a pitcher balks, every runner advances one base. In Bae’s case, that winning run strolled straight down to home plate.

As Doosan are currently just a few games behind SK in third, this costly mistake from Bae seriously cut down on the Bears’ chance of catching the Wyverns over the next two weeks.

In Sunday’s game, the drama came more from the bullpen rather than the field. With the Wyverns once again in a pinch situation, down 6-7 to the KT Wiz, starting pitcher Kim Kwang-hyun made a surprise appearance on the mound with two outs gone at the top of the ninth in a desperate effort to secure a come-from-behind victory.

This was the first time since Oct. 8, 2016, that Kim has appeared as a bullpen pitcher in a KBO game.

Despite the Wyverns’ hope that Kim would be able to end the inning without giving up a run, it wasn’t to be. Against the Wiz’s Hwang Jae-gyun, Kim gave up a solo home run to extend KT’s lead by two.

As the Bears also lost their Sunday game to the LG Twins 4-10, they’ve moved down a spot to third, now 4.5 games behind the Wyverns.

Sunday’s loss not only affected the Bears’ standing in the regular season but was also a big disappointment as they had a dominant head-to-head record against the Twins.

Despite the loss, the Bears still have a head-to-head record of nine wins and five losses against the Twins this year. For the Twins, this is a significantly improved record compared to the previous season, as the Twins only picked up one win in 2018 against the Bears.

Although the loss led the Bears to drop a spot in the regular season standing, they are still a threat to the Wyverns, as they had the most rain cancellations this season. As of Monday 6 p.m., the Bears have 12 more games remaining to finish their regular season.

If so, the Wyverns will still take away the regular season title, as they’ll be ahead in winning percentage.

Although the Wyverns are in a better position than the Bears to win the regular season, they can’t celebrate just yet. On Thursday, the Bears and the Wyverns will play a double-header, with the two teams playing two games in a single day. If the Bears win both games, they’ll have a significantly higher chance of re-claiming the title and will pull ahead of the Wyverns in the head-to-head record for this season at nine wins and seven losses.

With two wins, the Dinos extended their lead in fifth place by 3.5 games. As the Dinos won their two-game series against the Lions and the Wiz won against the Heroes and the Wyverns over the weekend, the two teams are still 3.5 games apart.

This week, the KBO will continue to make up for postponed games from throughout the regular season.

Today, the Heroes will play the Hanwha Eagles in Daejeon while the Dinos will face the Kia Tigers in Gwangju.

On Wednesday, the Dinos will head to Incheon to play the Wyverns while the Tigers will host the Lotte Giants at home in Gwangju. The Twins will play against the Lions in Pohang, North Gyeongsan.