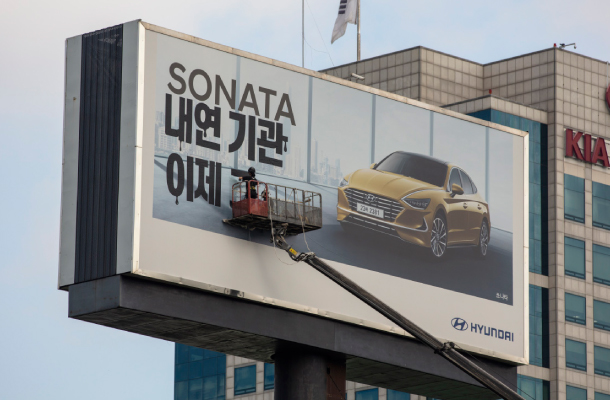 A man writes a message reading “No more internal combustion engines” on a billboard promoting Hyundai Motor’s Sonata sedan in front of the automaker’s headquarters in Yangjae, southern Seoul, on Monday. [GREENPEACE]

Greenpeace is under police investigation for defacing an advertisement for Hyundai Motor in their war against pollution from cars.

A member of the environmental group climbed a 40-meter (131-foot) billboard for Hyundai Motor’s new Sonata sedan close to the automaker’s head office in Seoul on Monday morning and posted a message in large black hangul characters reading, “No more internal combustion engines.”

“Getting rid of internal combustion engines is a must to-do task in today’s environment,” said Lee In-sung, a climate campaigner for the local branch of the non-governmental environmental organization, which is headquartered in Amsterdam.

“As a part of our organization’s global campaign to [take] action against automakers developing vehicles with internal combustion engines, we thought it is necessary to voice our opinion to Hyundai Motor, one of the largest producers of such cars in the world.”

According to the group, Hyundai Motor and Kia Motors together produce the fifth-largest amount of greenhouse gases among automakers following Volkswagen Group, the Renault-Nissan-Mitsubishi Alliance, Toyota Motor and General Motors.

A Hyundai Motor spokesperson said over the phone that police are investigating Greenpeace campaigners for allegedly defacing the advertisement after its security employees reported the incident to officials earlier this morning. The group’s members could face up to three years in prison or a 7 million won ($5,900) fine for property damage.

The spokesperson added that as one of the largest car manufacturers in the world, greenhouse gas emissions are inevitable. The automaker announced last month that it plans to develop a lineup of 17 eco-friendly commercial vehicles by 2025 with seven being all-electric and the remaining 10 being fuel-cell electric vehicles.