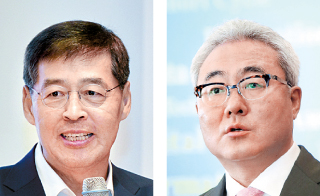 The CEOs of two of Korea’s top electric vehicle (EV) battery makers LG Chem and SK Innovation finally got together to hash out their differences face-to-face on Monday, but the meeting ended with no progress made.

This was the first top-level meeting between the two companies since they began a tit-for-tat series of lawsuits across Korea and the United States in April.

The feud started when LG filed a suit against SK with the U.S. International Trade Commission (ITC), accusing it of stealing trade secrets by hiring former LG employees, but it has since spread to Korea as well.

LG and SK are the No. 1 and No. 3 rechargeable battery makers in Korea.

Both companies confirmed in a statement Monday morning that LG Chem Vice Chair and CEO Shin Hak-cheol and SK Innovation CEO Kim Jun had “confirmed their stance,” implying that there were no significant results or progress toward a possible resolution.

Other than that, details of the discussion were not disclosed. SK added a brief message saying that the “meeting was meaningful in its own right.”

Earlier this month, LG said in a press release that discussions between the two companies should be held at the CEO level.

SK had repeatedly said its executives had made efforts to resolve the dispute through talks but failed. LG, on the other hand, said it never received an official request, adding that an apology and compensation plans should come first.

The Ministry of Trade, Industry and Energy played a role in bringing the two CEOs together on Monday, but, contrary to earlier reports, a government official was not present at the meeting.

After LG filed a suit against SK to the ITC and the U.S. District Court of Delaware in April, SK countersued LG, claiming damages for defamation in a Korean court in June. Last month, it submitted another case accusing LG of infringing its intellectual property rights.