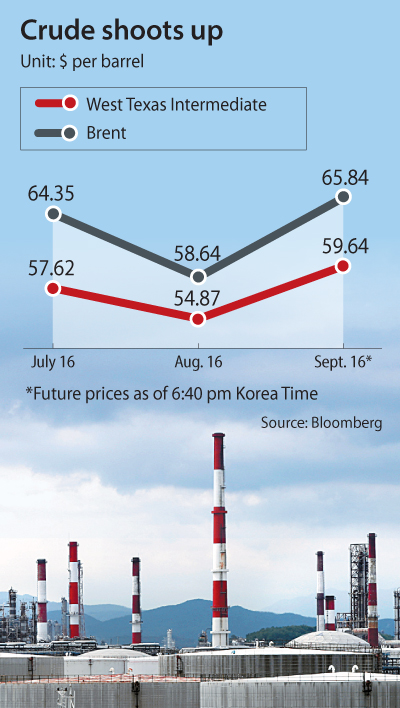 Local refiners are keeping a close eye on crude oil prices after a drone attack halved the oil production of Saudi Arabia, Korea’s largest crude oil supplier, over the weekend.

The general consensus among industry watchers is that a price hike in crude oil is inevitable in the short term. This may briefly benefit oil refiners, but if prolonged, the hike will deal a negative blow to their refining margins.

After the Saturday attack, Saudi Arabia decided to shut down two crude oil refineries that produce 5 percent of the global crude oil supply. On that news, Brent crude, a European gauge, jumped 20 percent during the trading session Monday.

“According to what we’ve heard from the supply team, there has been zero impact on the original shipping schedule until now,” a company spokesman said Monday.

S-Oil’s stock price went up 2.31 percent compared to the previous trading session thanks to investors’ expectation that the price hike would lead to better revenues.

But this is not necessarily good news.

“If the price continues to go up, it will eventually pull down demand. For us, price stability is the best scenario,” an industry source said.

The other three major oil refiners - SK Innovation, GS Caltex and Hyundai Oilbank - are less dependent on Saudi crude, which accounts for between 11 and 15 percent of their imports.

The essential question is how consumers will react to price hikes. If demand starts to fall, refiners may have to settle for smaller margins.

At the moment, oil refiners say it’s hard to predict how long the drone attack’s effects will last on crude oil prices. The exact impact of the damage and when the plants will restart operations remain unclear.

On Monday, Korea’s Ministry of Trade, Industry and Energy said it will consider releasing oil reserves owned by the government and the private sector into the market if the situation worsens, in order to stabilize domestic supply and prices. As of the end of last year, Korea had 200 million barrels of oil reserves.

The Trade Ministry called for calm on potential shortages to oil supply and price fluctuations during an emergency meeting between senior government officials and oil industry representatives, explaining that Saudi Arabia has ensured that it would deliver its orders through reserve supplies.

“We don’t expect problems in the short term,” said the trade ministry in a statement.

“However, if the situation becomes drawn out, there is a possibility of problems in supply and short-run volatility in global crude oil prices,” it said.