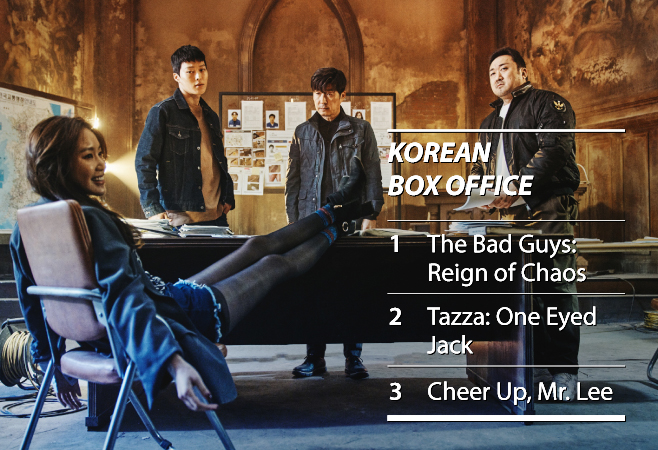 Local films dominate the top five spots at the box office over the Chuseok weekend. Above is a scene from the film “The Bad Guys: Reign of Chaos,” featuring actors Kim A-joong, Jang Ki-yong, Kim Sang-joong and Ma Dong-seok. [CJ ENTERTAINMENT]


Three major local films were released last week in line with the Chuseok harvest festival, and all three shot to the top of the Korean box office over the weekend.

“The Bad Guys: Reign of Chaos” climbed up to the top spot, selling 1.97 million admission sales through 1,511 screens. It seems that audiences are as desperate as ever for a chance to see Ma Dong-seok’s latest blockbuster character do what Ma does best - punch his way through any obstacle.

Featuring a star-studded cast including Ma, Kim A-joong and Jang Ki-yong as criminals who are not so evil recruited from prison to catch truly evil convicts that escaped from a convoy. Ma and the gang are led by Oh Gu-tak (played by Kim Sang-joong). Oh was a former detective once infamous for using any means to catch his targets.

The film setting and some of the characters were taken from popular OCN drama series “The Bad Guys,” which ended last year. Kim A-joong and Jang’s characters were new additions for the movie version, while Kim Sang-joong and Ma reprised their roles from the original. Although the basic idea of having bad guys become heroes to save the day remains the same in both versions, the two are separate from each other. The movie also retains a lighter, more comical atmosphere than the original series’ dark mood, largely due to the influx of new characters.

“Tazza: One Eyed Jack” took second place behind “The Bad Guys: Reign of Chaos,” gathering 982,000 moviegoers to 1,415 screens. Tazza, in Korean, is what local gamblers call the most skilled gambler. In this third installment in the Tazza series, protagonist Il-chul spends his days stuck in a cram school preparing for the government recruitment exam, but at night, he rules the casinos with his quick hands and natural talent for swindling as he is the son of legendary Tazza Jjakgwi.

The story begins as Aekku, a one-eyed gambler, assembles a team called “One-Eyed Jack,” consisting of the four top gamblers around the country including Il-chul to bet their lives on a 5 billion won ($4.1 million) pot poker game.

“Cheer Up, Mr. Lee” took up the third spot with 644,000 tickets sold in 990 screens. Marking actor Cha Seung-won’s return to the comedy genre after 12 years, the film was highly anticipated by his fans but was met with relatively mediocre results in the box office.

Cha takes on the role of Cheol-soo, a dim-witted but handsome and muscular man who works in his younger brother’s kalguksu restaurant. One day, he finds out that he has a sick daughter named Saet-byeol suffering from leukemia. But this is not one a comical father-daughter bonding story, but one that reflects the suffering of people still struggling with the trauma of the 2003 Daegu subway fire tragedy.