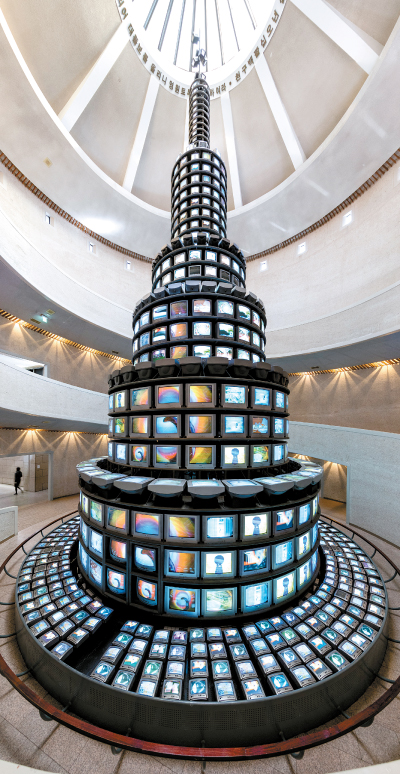 “After consulting with numerous experts and researching similar cases in other countries, we have decided that the MMCA will preserve the original form of the work as much as possible, which means that we will be replacing broken monitors with CRT monitors,” said Park Mi-hwa, head of the exhibition team at the MMCA.

“The More, The Better” is Paik’s largest work - an 18.5-meter (60.7-foot) tower with a diameter of 11 meters, weighing 16 tons and comprised of 1,003 monitors. It was created in 1988 to celebrate the Seoul Olympics held that year and is housed in a domed hall in MMCA Gwacheon in Gyeonggi. It has been dubbed one of the most monumental media art works to be created by a Korean artist.

The installation had been maintained by the MMCA and all 1,003 monitors were replaced in 2003. But last February, numerous monitors malfunctioned. A safety test conducted the following month by the Korea Electrical Safety Corporation revealed that the upper parts of the work could be a fire risk and “The More, The Better” has been turned off since.

Since the average CRT monitor lasts approximately 10,000 hours when run 24 hours a day - which converts to 417 full days - they have been replaced by flatter, lighter and cheaper LCD or LED monitors that last longer starting in the early 2000s. In fact, 23 of the 40 experts whom the MMCA consulted said that the monitors should be replaced by LED monitors, while only 12 said that the pre-existing technology should be maintained. Five had other opinions.

For instance, Lee Jung-sung, a technician who worked with Paik in installing the work, believes that replacing the monitors with LED “is the only viable option right now,” and that Paik himself had often expressed a willingness to use the latest technology during his lifetime. 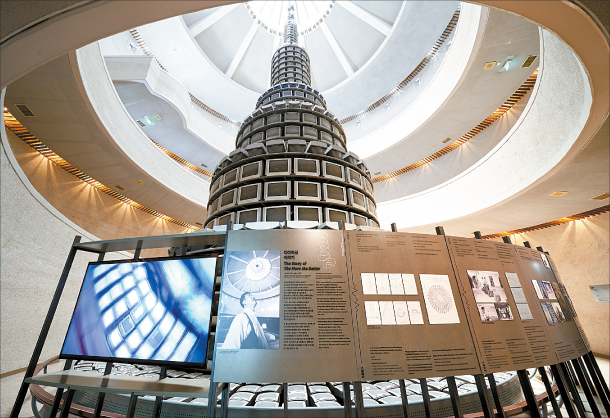 Nam June Paik’s largest video installation, “The More, The Better,” at the MMCA Gwacheon, Gyeonggi, is seen in a file photo fully functioning at left; above, turned off as it has been since February 2018. [MMCA]

“Nam June Paik always kept an open mind to new technology and gadgets of the era. He believed that by replacing the monitors, it is not damaging the original work but rather changing and improving the quality of the work, which I believe is the approach we should be taking at this point,” said Lee.

Others who are on the side of LED replacements include Kim Nam-soo, a former researcher at the Nam June Paik Art Center; Kim Won, the architect who built the structure for “The More, The Better”; Kim Hong-hee, the president of the Nam June Paik Culture Foundation and former director of the Seoul Museum of Art; Chung Joon-mo, president of the Korea Art Authentication & Appraisal Research Center and a former curator at the MMCA; and Bernhard Serexhe, former chief curator of ZKM and also a certified consultant for electronic and digital art. Those who favor maintaining CRT monitors include Lee Won-gon, western art professor at Dankook University; artist Shin Ki-woun; Cecile Dazord, curator at C2RMF; Morgane Stricot, media and digital art conservator at ZKM; and Solange Farkas, a video art director in Brazil.

According to Park, head of the exhibition team at the MMCA, the reason the museum chose to primarily use CRT monitors with minimum use of LEDs was “to preserve the original form as much as possible.” Since “The More, The Better” is so big, visitors view the monitors from various angles, and LEDs actually look less bright than CRTs if viewed obliquely. So the work could look less vibrant with LEDs.

Even though there are no factories making CRT monitors in Korea anymore, it is “not impossible to maintain the CRT monitors,” according to Park - even if they have to go to second-hand markets or import CRTs from China.

“Although there will inevitably come a time where we must use LED technology, what’s important right now is that we maintain the form close to the original while leaving our doors open to new technology. We must not stop our research and accumulate [more studies] for the future,” she said.

The MMCA will soon begin their restoration, and plans to have “The More, The Better” re-running from the later half of 2022. Despite the fact that it took the Whitney Museum of American Art seven years to restore 203 monitors for Paik’s 1989 work “A Work of Dizzying Complexity,” the MMCA plans to do a bigger job in three years “because so many people are waiting for the work to come back again.” During the process, the museum will also put together an archive and exhibition of Paik’s works for people to better understand his artistic philosophy.