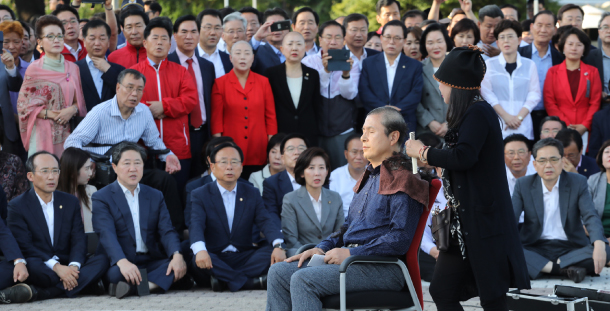 Hwang Kyo-ahn, chairman of the main opposition Liberty Korea Party, center, has his head shaved in front of the Blue House at 5 p.m. on Monday to protest the Justice Ministry’s plan to tighten public affairs guidelines and to demand the dismissal of Justice Minister Cho Kuk. [YONHAP]

The main opposition party criticized Monday the Moon Jae-in administration and the ruling party’s plan to tighten rules on press reporting of criminal investigations, calling it a “gag” - and an attempt to shelter Justice Minister Cho Kuk from an ongoing investigation.

“Cho’s threat to intervene in the prosecution’s appointments and the de facto gag law to prevent the media’s reports on the prosecution’s investigations are clear attempts to pressure and obstruct the ongoing probes,” Chairman Hwang Kyo-ahn of the Liberty Korea Party (LKP) said Monday.

“If the president continues to obstruct investigations into Cho, he will be held accountable not only politically but also criminally.”

Hwang was referring to speculation that Cho will use his power to reshuffle the prosecution. He was also complaining about the Ministry of Justice’s plan to revise public affairs guidelines for the prosecution, particularly aimed at stopping the publication of criminal proceedings against a suspect before an indictment.

The government and ruling party have said tightening media rules will be the first step to reform the prosecution, since National Assembly approval is not required.

They will have a meeting tomorrow to discuss plans, and Cho will attend to present the Justice Ministry’s initiative.

In protest of the plan to tighten the public affairs guidelines and to demand the dismissal of Cho, Hwang had his head shaved in front of the Blue House at 5 p.m. on Monday.

Moon sent an aide to talk him out of it, but failed.

Hwang was the third politician to shave his head in protest of Cho’s appointment as the new justice minister.

“The new public affairs guidelines reportedly included a clause that a prosecutor who violated the gag law would face an inspection,” said Rep. Na Kyung-won, the LKP floor leader. “Because his family is being investigated, Cho is trying to block the prosecution from publicizing their charges.”

Cho denied Monday growing speculation that he will use his power to reshuffle the prosecutors to influence the probes.

“The prosecutors in charge of the investigations [of my family] will not face disadvantages as long as they do not violate the constitutional spirit and law and order,” he said.

Speculation was ripe that Cho may advance a routine reshuffle of the prosecution scheduled for February.

Cho said Monday he will actively push organizational restructuring. He, however, refused to answer reporters’ questions on what he thinks about the Justice Ministry’s plan to tighten media guidelines amid the probes into his family.

The Justice Ministry said its initiative will first focus on revising the public affairs guidelines of the prosecution in order to stop the prosecutors from making public investigation of suspects before indictment. According to the planned changes, the media will be banned from taking photos or videos of a suspect when he or she is summoned by the prosecution for questioning before an official indictment.

The prosecutors will be barred from making public schedules of questioning. Names of high-profile suspects such as lawmakers and senior officials will also be banned from being publicized.

The minister is required to order an inspection into a prosecutor who violates the new media guidelines. Cho has the right to revise the rules without the National Assembly’s consent.

Cho’s wife could be one of the first suspects to be protected by the new regulations. Prosecutors indicted Chung on Sept. 6 on a charge of fabricating an academic award that Cho’s daughter had used for admission to Pusan National University’s medical school. The prosecution did not question Chung before the indictment, and speculation has grown that she will soon be summoned for another investigation into a private equity fund she invested in.

Rep. Cho Jeong-sik, chief policymaker of the ruling Democratic Party, dismissed criticisms that it is the wrong time for the Justice Ministry to revise its media guidelines amid an ongoing probe into Cho and his family.