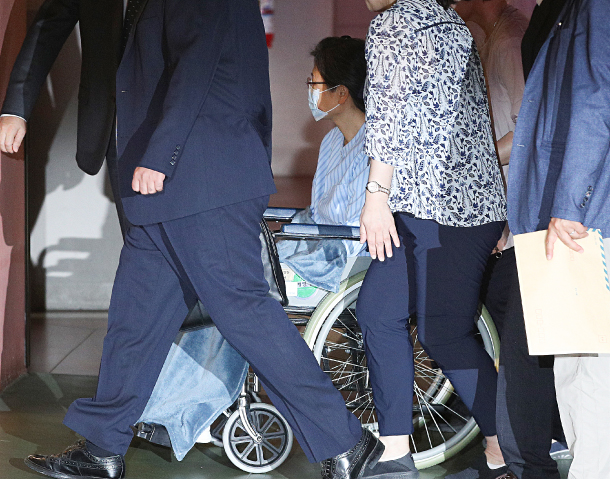 Former President Park Geun-hye, in a wheelchair, is being hospitalized at Seoul St. Mary’s Hospital in Seocho District, southern Seoul, on Monday to receive surgery on her left shoulder, exiting the prison she has been detained in since March 2017 on charges of power abuse, corruption and violating election laws. [YONHAP]

Former President Park Geun-hye was hospitalized Monday to receive surgery on her left shoulder, exiting the prison she has been detained in since March 2017 on charges of power abuse, corruption and violating election laws.

Park arrived at the Catholic University of Korea, Seoul St. Mary’s Hospital in Seocho District, southern Seoul, at 10:40 a.m. Monday. She is expected to receive surgery on her left shoulder as early as today after undergoing several tests.

Her reprieve from Seoul Detention Center was granted by the Ministry of Justice on Wednesday.

“We decided to allow her hospitalization after receiving the opinion of a doctor that she needs surgery on her left shoulder,” an official of the ministry told the JoongAng Ilbo.

“It’s not a complicated surgery but the patient may experience acute pain afterward,” a doctor at the hospital where Park is being treated told the JoongAng Ilbo.

Park was impeached for power abuse and her involvement in a corruption scandal and removed from office in March 2017. She was placed under arrest that same month and indicted in April that same year.

In April 2018, the Seoul Central District Court sentenced Park to 24 years in prison and a fine of 18 billion won ($15.2 million), after it found her guilty of 16 charges of corruption and power abuse, including conspiring with her long-time confidante Choi Soon-sil to force a number of Korea’s major conglomerates to contribute money and sign deals with non-profit foundations and companies controlled by Choi.

The prosecution subsequently filed an appeal requesting 30 years of imprisonment.

In August 2018, the Seoul High Court upheld all charges of corruption and power abuse and added another year to Park’s jail sentence, bringing her total to 25 years in prison, and increased the fine to 20 billion won.

That ruling was overturned by the Supreme Court in August this year. The Supreme Court sent the case back to the Seoul High Court, requesting the court dole out separate rulings for Park’s bribery and power abuse charges.

Park has been detained throughout the process as she was undergoing two additional trials - one for illegally interfering in parliamentary elections in April 2016 and another for taking off-the-books funds from the country’s spy agency.

In July 2018, the Seoul Central District Court sentenced Park to two years for election law violation and another six years for taking off-the-books funds from the country’s spy agency.

In November 2018, the Seoul High Court upheld the lower court’s decision on election law violations and Park did not file for an appeal, bringing the case to conclusion.

In July this year, the high court reduced the six-year sentence on Park for taking the off-the-books funds from the spy agency to five years. The case has since been taken up by the Supreme Court.

In April this year, as Park was serving her two-year sentence and awaiting the Supreme Court’s decision on her power abuse and corruption case, she requested the prosecution for a time of reprieve from imprisonment for health reasons.

Her request was dismissed.

She made another request on Sept. 5, saying that she needed some time to rest outside of the prison to improve a back problem she has. The request was also rejected by the prosecution.

“We do not see any evidence that her state of health is life-threatening,” the prosecution said in a statement at the time.

Park then made a separate request to the Ministry of Justice for a time of reprieve to receive medical treatment at a hospital.

In Korea, requests for reprieve from a prison sentence must be made to the prosecution but requests for temporarily leaving the prison to receive surgery or other treatment at hospitals are made to the head of the detention center, who then submits them to the ministry. The ministry granted her request on Wednesday.