Kristie Ahn’s quest for her maiden WTA title got off to a strong start in Seoul on Monday, as the Korean-American star enjoyed a breezy victory in the land of her parents’ birth. 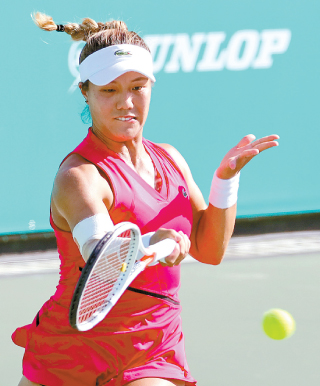 Ahn overwhelmed Timea Bacsinszky of Switzerland 6-0, 6-0 in the first round of the Korea Open at Olympic Park Tennis Center. This is Ahn’s first appearance at this tournament in two years. She was eliminated in the second round in 2017 and didn’t play here in 2018.

Ahn is riding high from a fourth-round appearance at the U.S. Open earlier this month. Ahn hadn’t gone past the first round at any Grand Slam event until the U.S. Open, and her run included a victory over former French Open champion Jelena Ostapenko.

Born in New Jersey to Korean parents, the 27-year-old Ahn said she was “really happy” with her level of play, though she didn’t expect to win Monday without dropping a game.

“I think I was moving pretty well. My ground strokes were solid,” she said. “Overall, I just felt very solid. Everything felt good.”

After the U.S. Open, Ahn jumped 48 spots to reach No. 93 in the world rankings. She said she’d like to improve her serve and her transition game but added, “My game is right there. I am very close.”

Ahn said what really separates the players in the upper echelon from the rest can be the confidence with which they play.

“In pressure moments, they play better and they step up,” Ahn said. “And girls at the top serve really well.”

Ahn qualified for the U.S. Open in 2008 at age 16. But instead of turning pro, she attended Stanford University and served as captain of their women’s team.

Ahn recalled that she did so much more in her four years at Stanford than just winning tennis matches.

“When I went to college, I didn’t know if I wanted to keep playing tennis. I said, ‘I’ll stay for four years, and at the end, if I like tennis, I’ll try pro. If not, I’ll get another job and I’ll be fine with it,’” she said. “Having a support system to play at Stanford was an incredible experience. It was a great opportunity to find my passion for tennis again.”

Ahn said her father traveled with her. Her grandmother attended the tournament two years ago, but Ahn said she often gets stressed out watching tennis so that it’s perhaps best for her to stay away this time.

With her family watching, will Ahn make the final this time?