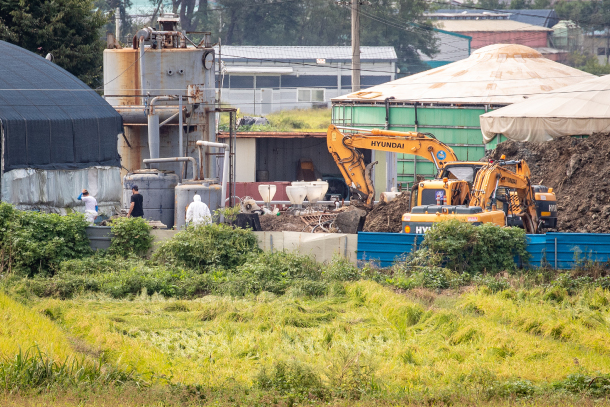 Workers in contamination suits cull pigs at the farm where the first case of African swine flu in Korea was detected as part of prevention measures against African swine fever in Paju, Gyeonggi on Tuesday. Many countries deal with the disease through mass culling of livestock as vaccines haven’t been developed yet. [NEWS 1]

Korea’s first confirmed cases of African swine flu were found on a farm in Gyeonggi.

According to the Ministry of Agriculture, Food and Rural Affairs on Tuesday, five pigs were found dead on a farm in Paju, Gyeonggi on Monday.

The pigs had shown signs of high fever. The ministry said it tested and found the pigs were infected with the incurable, contagious swine flu, which it confirmed at 6:30 a.m. Tuesday.

The government said there were no pig farms in the 3-kilometer (1.9-mile) radius from the infected farm.

“We have diagnosed that the dead pigs found at a farm in Paju, Gyeonggi, on Monday were infected with the African swine flu,” said Agriculture Minister Kim Hyeon-soo. “As such, we have raised the alert level from dangerous to critical.”

The ministry said it is taking preemptive action to prevent the spread of the disease. “The first week after an outbreak is most dangerous considering that the African swine flu has a dormant period,” Kim said.

The government said 3,950 pigs on three separate farms owned by the same farmer were culled, while access to the farm where the infected pigs were found was restricted.

Additionally the government is conducting thorough testing for possible outbreaks at 19 pig farms in a 10-kilometer radius of the infected farm.

Starting at 6:30 a.m. Tuesday, the government ordered a 48-hour lockdown of vehicles on all pig farms, slaughter houses and feed factories.

The government said it is still looking into how the pigs were infected.

There is a possibility the pigs were infected by a wild boar that caught the virus from North Korea. The farm was roughly 10 kilometers from the border separating the two Koreas.

In May, North Korea reported an outbreak of the swine fever virus to the World Organization for Animal Health, raising the possibility it could spread through border-hopping boars. The South Korean government has been on alert since.

“The investigative team has been dispatched to the site [of origin] and currently looking into how the pigs were infected,” Kim said. “Starting today we are working with related departments including the Environment Ministry in controlling the number of wild boars in the border region.”

The minster said the government will fumigate all 6,309 pig farms across the country and complete an investigation on the course of infection within 48 hours.

Despite the possibility of the pigs in Paju being infected from a wild board that traveled from North Korea, the Blue House said it has not had any contact with North Korean authorities on the outbreak.

“We have no plan,” said a Blue House official. “Finding the cause of the outbreak should come first.”

While the swine flu is harmless to humans, it is deadly to pigs, and the fatality rate is between 80 to 100 percent.