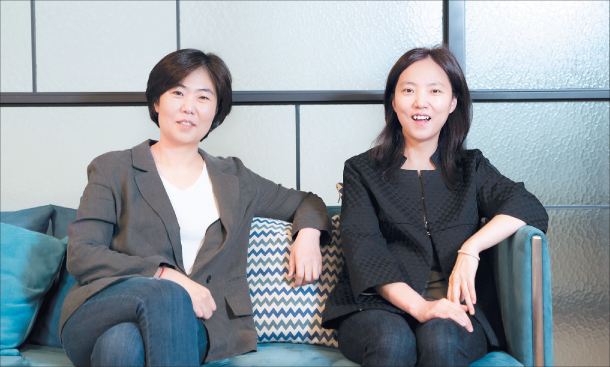 Sisters Hong Jung-eun, left, and Hong Mi-ran have been writing scripts for drama series as a duo for 15 years. They are often dubbed Hongjamae, which means “the Hong sisters.” They recently wrote drama series “Hotel Del Luna.” [TVN]

Of all the big-name scriptwriters, the Hong sisters, also known as Hongjamae, are undoubtedly the ones who most flawlessly weave romance and humor together to stay true to the genre of romantic-comedy.

This time, sisters Hong Jung-eun and Hong Mi-ran took things one step further by adding horror into the mix for recent drama series “Hotel Del Luna,” which ended with a 12 percent viewership rating earlier this month. “Hotel Del Luna” is the highest-rated drama series on cable channel tvN so far this year.

In addition, the drama helped the duo achieve their first double-digit viewership rating since the huge success of “The Master’s Sun” (2013).

Amid a slew of rom-com scriptwriters, the Hong sisters differentiate themselves with true-to-life characters.

Unlike typical rom-com characters, who are willing to give up everything in return for love, the Hong sisters’ characters tend to be far more three-dimensional. For example, the A-list heartthrob who happens to fall in love with an over-the-hill singer in “The Greatest Love” (2011) doesn’t immediately throw everything away for true love, but instead frets over how his relationship with the fallen star could ruin his public image. The writers often add twists to stereotypes and flip cliches upside down.

They also know how to make the audience laugh, maybe because Jung-eun worked as a scriptwriter for a TV show for three years.

Thanks to their unconventional style, the duo soared to success soon after their debut.

With harsh reviews from critics and viewers, the two drama series failed to intrigue audiences and viewership ratings hit rock-bottom. To make matters worse, the sisters were embroiled in a copyright infringement lawsuit with “A Korean Odyssey,” which reportedly cost more than 10 billion won ($8.4 million) to produce.

Jeong Eun-suk, the author of web novel series “Aeyugi,” filed a lawsuit against the Hong sisters for copying her plot in “A Korean Odyssey.” Although the Hong sisters were cleared of plagiarism earlier this year, they have been having a hard time until recently.

With a cast including singer-actor Lee Ji-eun, known as IU, “Hotel Del Luna” was already highly anticipated by drama fans long before it hit screens.

Set in a hotel called Hotel Del Luna, Lee plays the female lead of Jang Man-wol, the owner of the hotel who is cursed to live for 1,300 years, while Yeo Jin-goo plays Gu Chan-seong, the hotel manager who later falls in love with his boss.

When the plot was unveiled, however, the drama came under fire for having similar stories to Japanese manga “Usemono Yado.” Some said “Hotel Del Luna” reminds them of the drama series “Guardian: The Lonely and Great God” (2017), but with the relationship reversed from the 2017 drama series.

That criticism quickly faded as the drama unfolded.

“Hotel Del Luna” is the last in the Hong sisters’ ghost trilogy. The ghost series first started with “My Girlfriend is a Nine-Tailed Fox” (2010), followed in 2013 by “The Master’s Sun.”

According to the Hong sisters, “Hotel Del Luna” was actually the first draft for “The Master’s Sun.”

The sisters said during a recent interview that they have always been huge fans of ghost stories, so they grew up watching the drama series “Korean Ghost Stories” back in the 1970s and 80s.

The pair became more interested in such stories following the recent death of their grandmother.

The following are edited excerpts from a conversation with the Hong sisters, who have been writing together since 2005. This interview contains some spoilers.

Q. When did you decide the ending for “Hotel Del Luna”?

Mi-ran: Jang Man-wol was bound to leave while Gu Chan-seong was set to see her off. The relationship of the two was decided in that way from the beginning. But as the two fell for each other, their love became deeper. The ending scene needed heavy CGI [computer generated imagery] technology, so we finished writing the scripts for the scene a month before the final episode was due to air.

Was it always going to have a sad ending?

Jung-eun: The purpose of the Hotel Del Luna is comforting the souls of the deceased so that they can move on [to their next life]. Jang is an iconic ghost and represents the hotel. Jang had to leave the hotel and that was the premise of the drama series when we created it in the first place. All the hotel employees could leave the hotel and move on to their next life with pleasure because their pain in this life vanished.

We thought Jang walking the Yudo Bridge in style and Gu watching her walk away was a suitable ending for the two characters.

Actor Kim Soo-hyun played a cameo role in the epilogue of the drama series and some viewers expressed their anticipation for a second season of “Hotel Del Luna” because of that epilogue.

Mi-ran: We don’t have a detailed plan for a second season yet. We added that scene in order to give viewers the impression that the place for ghosts would remain.

It is true that you were only willing to make the series if you could cast Lee as Jang?

Mi-ran: We really meant it. Jang is a complex character with many different sides, from being haughty to charismatic to bossy to pathetic. We thought Lee shares those sentiments with Jang. All of us, including director Oh Choong-hwan, tried our best to coax her [to take the role].

Jung-eun: We had a plan B in case we couldn’t get Lee, by reversing the relationship and making it the story of a male hotel owner and a female manager.

But if we had to go that way, we may have lost some of the originality and wouldn’t be able to talk about reversed gender roles between a female boss and a male employee. So it had to be Lee no matter what.

Yeo did well in portraying his character.

Jung-eun: I think he has this natural-born talent for acting, something that is very intrinsic. When we got together for the first script reading, we were concerned about Yeo still having the image of his previous character so we had discussions about his character on that day.

After the talks, Yeo changed the way he acted right away. You can’t do that if you act only with your brain. Jang has many characteristics and is a flamboyant character, so Gu could look flat. Yeo did well and his character was able to shine thanks to his performance.

Some viewers said you didn’t give to two main characters enough romantic scenes.

Mi-ran: The relationship between Jang and Gu is something that can’t last long. That’s why sad music was used for scenes, even if the two were smiling. Since the relationship doesn’t have the promise of a rosy future, viewers must have felt thirsty for more romance between the two.

Jung-eun: Gu is a serious guy. He must have known that he can’t express his love for Jang as if the two would live happily ever after. We thought their love wouldn’t be deeper by having more romantic scenes. We believed such scenes would overshadow the tension and sorrow between the two.

Jung-eun: When we did “My Girlfriend is a Nine-Tailed Fox,” it was hard to find a company that could add quality CGI to a drama series. The working procedure was really slow and there were only a few companies that could do the job, so the first few scenes were made with CGI and later we used the tails from stuffed toys.

But we saw our imagination come to life with “Hotel Del Luna.” The hotel came into sight out of nowhere and ghosts became more realistic. Over the past 10 years, the CGI technology has come so far, the working conditions have gotten better with a lot more [financial] support, we could try everything we wanted to do this time.

When “Hotel Del Luna” began airing, some critics and viewers pointed out the similarities with Japanese manga “Usemono Yado” and Korean drama series “Guardian: The Lonely and Great God” (2017).

Mi-ran: I was upset. Love between a mortal and an immortal came out first with “My Girlfriend is a Nine-Tailed Fox,” so how can they think of “Guardian”?

A hotel that is only visible to ghosts was already used in the synopsis for “The Master’s Sun,” but we couldn’t afford to make the story into a drama series. A hotel for ghosts is not only already in “The Master’s Sun” and “Usemono Yado,” but it also exists in “Spirited Away” (2001). In the animated feature film, you can find a resort for goblins. Some people don’t see the big picture and blame us for having the same subject matter.

Jung-eun: When they raise questions [about plagiarism] over using similar writing materials, no one can avoid those accusations. Anyone can talk about a story in which the souls of the deceased are comforted. That story could take place anywhere, from a hotel to a restaurant.

It is unfair to say that a certain project is copying something else just because the two have similar subject matters. When a certain subject matter has already been used, it doesn’t mean that the creator owns the copyright to the subject. We feel proud and are relieved that our story has been proven to be different. I want you to know that “Hotel Del Luna” is developed from “My Girlfriend is a Nine-Tailed Fox.”

Where do you usually get your inspiration?

Mi-ran: Our first project was “Sassy Girl Chun-hyang,” and after that we wrote “Hong Gil-dong.” The two are based on Korean folktales. We get ideas from tales that are widely known.

This time, we got inspiration from “Beauty and the Beast” for “Hotel Del Luna.” A laptop is placed between us and we keep talking and the plot keeps changing. That’s how we write. We have different tastes for things we like but we tend to hate similar things. I never thought about writing [without my sister.]

It was impressive to see ghosts with their own stories to tell in “Hotel Del Luna.”

Mi-ran: I keep taking notes of some unique incidents featured on the TV. We don’t have a space for writing but we live together and we talk to each other a lot. Sometimes our story starts from A and then it goes directly to Z. I started out my career as a writer for TV shows, so I find pleasure in developing stories and characters.

Tell us about your next project.

Mi-ran: One of the things we’re planning right now is a fresh romance story that is similar to “You’re Beautiful” (2009). I want to write that kind of story before I get too old. Writing other classical romantic comedies such as “The Greatest Love” and “My Girl” are on our list, too.