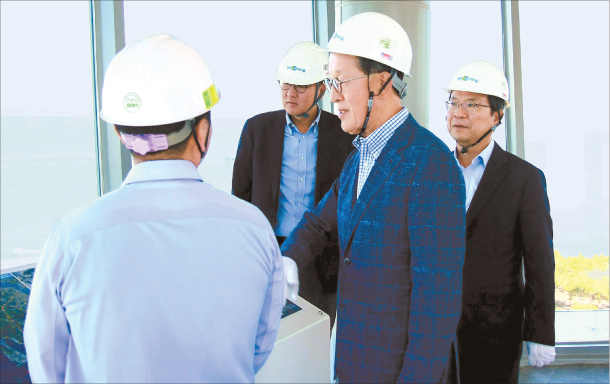 The terminal in Boryeong is the largest local LNG procuring base operated by private enterprises, according to GS. It was established as a 50-50 joint venture between GS Energy and SK E&S in 2013.

“Right now we are facing greater uncertainties than ever before,” Huh said on site. “But I ask of you to put in efforts so that [the terminal] can create big synergies with the LNG business that GS is pursuing.”

GS is focusing on creating an LNG value chain that stretches from LNG procurement to generating and selling power and maximizing synergy between its affiliates that use LNG as fuel, including GS Energy, GS EPS and GS Power.

GS EPS, the power-generating unit under GS, has been able to enhance cost competitiveness in power generation at its LNG power plant in Dangjin, South Chungcheong, after directly sourcing LNG fuel from the Boryeong terminal, the group said.

The terminal currently has four LNG tanks capable of storing a total of 800,000 kiloliters of LNG and supplies roughly 4 million tons per year to local energy companies including GS energy affiliates. The terminal is building two more LNG tanks to be completed by 2021 as demand for environmentally friendly fuel increases.

GS Group said in statement it is expecting that stable LNG supplies from the Boryeong terminal will be key to helping GS maintain its position as the largest private power generator in the country.

Huh, according to GS, has been visiting major GS facilities in an effort to check on their business status, emphasizing the importance of being on the spot, especially in difficult times.

In May, Huh visited the manufacturing site of GS Entec, a plant equipment producer, in Ulsan, the group said.