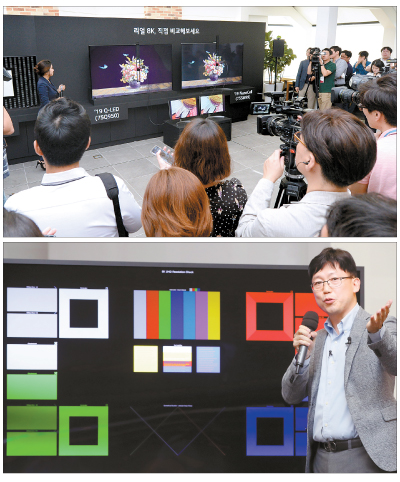 Korea’s top two electronics makers are embroiled in an extremely high-definition row over whether their 8K televisions are actually 8K.

The disagreement began at the IFA 2019 trade show in Berlin earlier this month, when LG Electronics called out Samsung Electronics, telling reporters that the Samsung QLED 8K TV isn’t actually 8K, according to international standards.

LG arranged a press event for local reporters on Tuesday, where it intended to further prove its claims about the Samsung TV. In response, Samsung called its own press conference on the same afternoon to defend its product.

8K resolution TVs offer four times the number of pixels as a 4K screen and 16 times a full HD TV.

The disagreement is over contrast modulation (CM) - a measurement of the sharpness of the contrast between adjacent black and white lines shown on the display.

In 2012, the International Committee for Display Metrology (ICDM) added CM as a standard for measuring display resolution. Since 2016, it has been mandatory for display makers to report the CM along with the number of pixels. In the TV industry, the ICDM sets global display standards that are used as a reference for many other certifications, including the International Organization for Standardization (ISO).

According to LG, Samsung’s products do not meet the minimum CM threshold of 50 percent and therefore are unfit to be truly called 8K.

At the Tuesday press conference, LG presented test reports from third-party certification institutes - VDE and Intertek - that showed Samsung‘s 8K TVs’ CM at below 20 percent. Results for LG’s 8K TVs, on the other hand, were above 90 percent.

“Consumers will pay a high price believing what they bought is an 8K television, the best resolution in the market,” said Nam Ho-jun, senior vice president of LG’s home entertainment division. “If [Samsung] really wants to lead the 8K game, it shouldn’t just focus on expanding its ‘8K’ lineup. It should start releasing products that abide to international standards.”

Samsung fired back, saying that CM is an outdated standard to assess high-resolution televisions.

“CM was a concept [announced in 1927] that was used to assess resolution for old displays like black and white TVs at a time when counting pixels was hard,” said Yong Seok-woo, Samsung’s vice president of the visual display division during the press conference. “CM alone cannot be used as [the] criteria for resolution.”

To prove its claim, the company shared a 2016 ICDM document that read “New display technologies make the current measure and calculation of display resolution (…) incomplete.”

LG had offered a different explanation on the same sentence earlier that day - explaining that this doesn’t mean CM is inadequate to assess display resolution, but just that there needs to be additional standards to better assess TVs today.

Samsung, on the other hand, brought up another part of the same document that said the committee “anticipates” the current use of standards to “discontinue (…) and will be replaced” by new methods.

The company also emphasized that its 8K TVs had received a VDE certificate for meeting the ISO’s resolution standards by pixel count.

Samsung is currently part of the 8K Association, which aims to set standards for 8K TVs and content. LG is not.