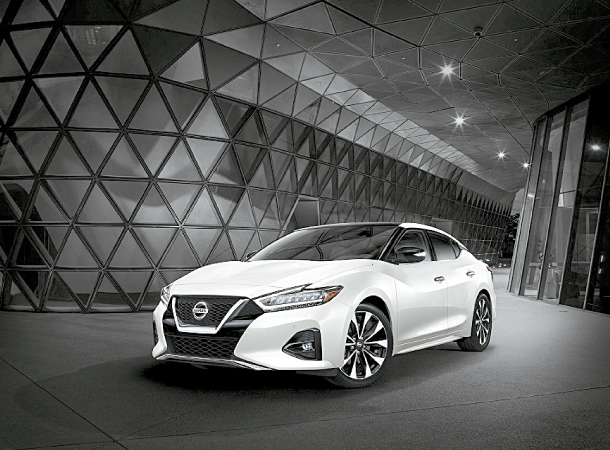 Nissan Korea introduced a new Maxima sedan amid reports that the company might withdraw from Korea.

The Korean unit of Nissan Motor announced in a statement Tuesday that the eighth-generation face-lifted model of the Maxima series follows the “sport sedan concept,” which is characterized by sharper exterior and luxurious interior designs.

The new Maxima, coming four years after Nissan introduced the flagship sedan in October 2015, has a larger and lower-positioned V-motion grille, a signature design feature for the automaker’s models.

The newest release is 4.91 meters (16.1 feet) in length, 1.86 meters in width and 1.44 meters in height and comes with ventilated seats and an advanced infotainment system that supports both Apple CarPlay and Android Auto.

“Launch of the new Maxima shows Nissan Korea’s devotion to do our very best to provide our valued local customers with the best products and services,” said Nissan Korea CEO Huh Sung-joong in a statement.

Nissan launched the new sedan in Korea a little more than a week after reports surfaced the Yokohama, Japan-based automaker is considering withdrawing from the country as continuing conflicts between Seoul and Tokyo hurts sales.

According to the Korea Automobile Importer & Distributors Association, sales for Nissan cars in Korea fell 88 percent to just 58 units last month from 459 posted a year earlier. Sales for all Japanese cars in Korea dropped 57 percent on year to 1,398 units from 3,247 units during the same period.

Nissan Korea, which opened its doors in March 2004, has been struggling in the local market due to fierce competition from Toyota and Honda. Its market share fell from 2.39 percent last year to 0.32 percent last month.

Last year, Nissan Korea reported an operating loss of 14 billion won on 210 billion won in sales, down 25.6 percent from a year earlier.