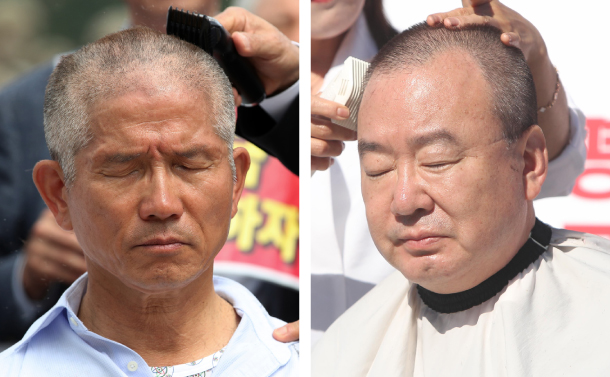 At least three former and current lawmakers from the main opposition Liberty Korea Party (LKP) shaved their heads on Tuesday to protest President Moon Jae-in’s appointment of Cho Kuk as his new justice minister, urging Korea’s anti-Moon forces to stand up against the president and his ruling Democratic Party (DP).

Former lawmaker and Gyeonggi Gov. Kim Moon-soo had his hair chopped off near a fountain in front of the Blue House in central Seoul on Tuesday at 11 a.m., followed by LKP Rep. Khang Hyo-shang, who shaved his head at a plaza near Dongdaegu Station in Daegu at around 3 p.m., and former Rep. Song Young-sun, who shaved hers at the same place as Kim at 4 p.m.

A total of seven people from the opposition bloc have shaved their heads so far to protest Cho’s appointment, mostly those with links to the LKP.

All figures have called on Cho to resign as prosecutors investigate a myriad of allegations against him and his family.

The LKP has been at the forefront of the anti-Moon and anti-Cho rallies since Moon went ahead and appointed Cho on Sept. 9 despite poll results showing over half the country didn’t want him to serve as the new Justice Ministry chief.

On Monday, political parties failed to settle on a date to begin the next National Assembly regular session as the DP, LKP and minor-right Bareunmirae Party clashed over whether to summon Cho to a parliamentary session.

The LKP and Bareunmirae Party refused to invite him, saying they could not acknowledge him as the justice minister.

Rep. Na Kyung-won, floor leader of the LKP, vowed Tuesday to make the upcoming regular session all about pressuring for Cho’s resignation and urged President Moon to fire him before he heads to New York on Sunday to attend the United Nations General Assembly.

“At a time like this, how can the president travel abroad and engage in diplomatic activities? He should fire Cho Kuk before he goes overseas.”

The LKP held their latest candlelight vigil on Tuesday evening near the Sejong Center for the Performing Arts in Gwanghwamun, central Seoul.

LKP Chairman Hwang held a solo protest in the vicinity leading up to the vigil, encouraging passersby to join his party’s demonstration.