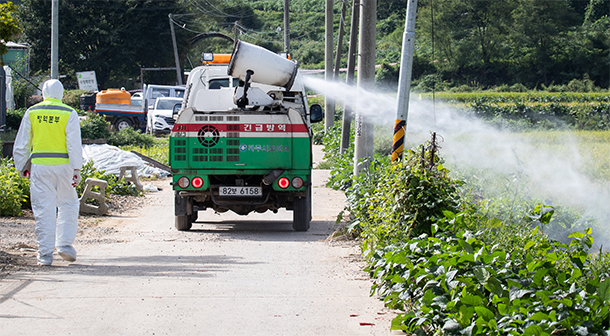 Korea’s first confirmed case of African swine flu has been detected at a farm in Gyeonggi.

According to the Ministry of Agriculture, Food and Rural Affairs on Tuesday the incurable contagious swine flu was reported at a farm in Paju, Gyeonggi at 6 p.m. on Monday after five pigs were found dead.

The pigs were said to show signs of a high fever. The ministry said it has tested and found the pigs were infected with the disease, which it confirmed at 6:30 a.m. on Tuesday.

The government said no other farms in a 3-kilometer (1.9-mile) radius from the farm appear to have been affected.

The ministry said it is taking actions to prevent further spread of the disease.

The government said 3,950 pigs from two separate farms with the same owner have been culled, while access to the farm where the infected pigs were found has been restricted.

Additionally the government is conducting thorough testing for a possible breakout at 19 pig farms in a 10-kilometer radius of the farm that was infected.

Starting at 6:30 a.m., the government has ordered a 48-hour standstill on all pig farms, pig slaughter houses and feed factories.