After a two-year absence, Noh Seung-yul will finally make his return to professional golf today, as he competes at the KPGA Tour’s Shinhan Donghae Open at Bear’s Best Golf Club in Incheon, starting today. 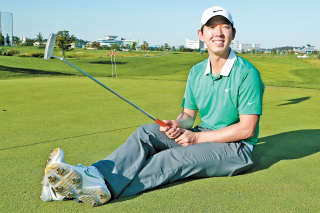 “Ahead of the tournament, I’ve been practicing about five to seven hours a day, since the early morning,” Noh said. “I think it’s more difficult than the military.”

In October 2017, Noh announced that he will be leaving the PGA Tour to fulfill his mandatory military service. Despite missing two seasons on the Tour, he will still be able to play in 26 PGA Tour events this season as he was given a major mandatory obligation extension.

As he finished inside the top 125 in FedExCup points during the 2016-17 season, Noh was able to retain his status card.

The 2019-20 season has already started on the PGA Tour, but Noh will not be heading to the United States until early next year. Before he starts playing on the PGA Tour, he will play in two KPGA Tour events - the Shinhan Donghae Open and Genesis Championship.

Although it may seem like Noh’s competing at these two events as preparation, he made it clear that it’s not just a warm-up.

“I want to win,” Noh said. “My participation at the Shinhan Donghae Open and Genesis Championship has been confirmed, and I want to win both.”

After the 2017 CJ Cup @ Nine Bridges, Noh joined the full-time reserve near his hometown in Goseong, Gangwon, so he could spend more time practicing golf once done with his military duty. However, he said he has some regrets in his decision in joining the full-time reserve as he wanted to join the Special Forces.

“I ran in the early morning and used the advantage of physical education time,” Noh said. “After I was done with my work with the military, I practiced my shots.”

For professional athletes, dropping out for two seasons to fulfil their mandatory military service can seriously damage their competitive edge. However, Noh said he wants to encourage younger players to take advantage of those two years in the military as it allowed him to think about golf and who he is.

“Before I went to the military, for a while, I thought golf was boring,” Noh said. “I started to wonder why I started this and why I have to continue this lonely fight against myself in this unfamiliar place in the United States. But as I got away from golf a little bit in the military, my motivation level started to go up. Now that I’ve done my military duty, I’m really curious and excited to see how much I can do.”

Noh also said that he wants to make a successful comeback to prove to the younger players that they can still play well after a two-year absence. Korean male professional golfers have to fulfill their mandatory military duty unless they’ve won gold at the Asian Games or won a medal at the Olympics.

During his time in the military, Noh changed his shots from hitting a draw to a fade. As Noh tends to hit a draw, which curves from right to left from a right-handed golfers’ perspective, he gets bigger numbers on dogleg-right holes.

“I fixed my general shot type to a fade,” Noh said. “[Now,] I hit a draw only when needed. It’s normally difficult to change your shot type while playing on the Tour, but it was only possible, thanks to a two-year absence.”

Before Noh left for the military, he was evaluated as one of best ball strikers in Asia, as he became the first Asian player on the PGA Tour in 2012 to exceed 300 yards in average driving distance. But throughout his time in the military, he gained more distance.

Having improved his golf game over the two years in the military, Noh will finally get to check his progress starting today at the Shinhan Donghae Open.

“This is my first official round in two years,” Noh said. “I think the first few holes will be important.”

Noh will play his first round with Chang Yi-keun of Korea and Yosuke Asaji of Japan at 11:40 a.m., teeing off from the first hole.