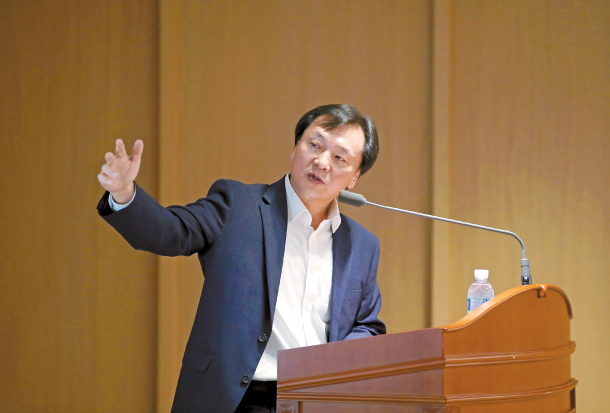 A signal for a rate cut was sent by Shin In-seok, a member of the monetary policy board at the Bank of Korea and a dissenter at the last meeting of the board.

Most members voted to keep the rate unchanged at that meeting last month, but Shin voted to reduce the rate.

He said on Wednesday that there is still “enough room” to maneuver, indicating that more cuts are possible. Cho Dong-chul joined with Shin in casting a dissenting vote.

The Bank of Korea moved to lower the key interest rate in July to 1.5 percent due to increasing uncertainties, although it paused at the next meeting last month. The major headwinds cited by Bank of Korea Governor Lee Ju-yeol include the ongoing trade dispute between the United States and China, Britain’s Brexit and Japan’s export restrictions, which have created drags on exports from and investment in Korea.

Shin’s remarks from a luncheon with reporters reinforced the current market consensus that the Bank of Korea will cut rates in October.

He was most concerned about declining inflation expectations affected by persistently low prices, a phenomenon that some say is the onset of deflation.

“When the expected inflation rate dips near the zero percent range, that risks a steep downturn in consumer sentiment,” Shin said.

“The decrease in the expected inflation rate could also erode the effects of monetary policy,” he said.

The expected inflation rate refers to the percentage increase in the level of prices over a given period that is anticipated by participants in an economy.

With a minus 0.038 percent on-year change in the consumer price index in August, Korea posted the first negative reading of that number since it was first tracked in 1965.

The historically-low figure invited a flurry of worries - especially fears of deflation.

The consumer price index grew at an average rate of 0.5 percent over the past eight months, an all-time low for the first eight months of any year.

The board member said that Japan is a case study of what could happen.

“The weak expectations for inflation prompted the Bank of Japan to respond with the zero percent interest rate,” Shin said. “But by that time, the nominal neutral interest rate already reached zero percent, which makes the monetary policy almost ineffective.”