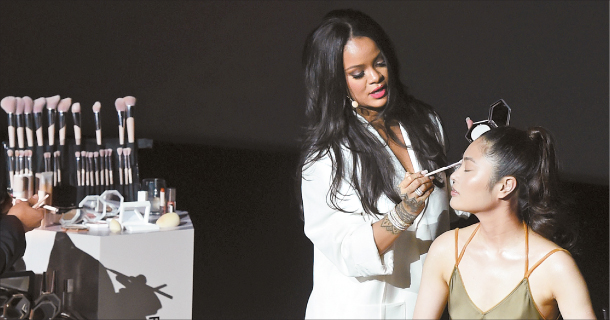 Fenty paid a visit to Seoul on Tuesday to hold a beauty talk and makeup class in Jamsil, southern Seoul. She also held a beauty class in September in Dubai, United Arab Emirates.

Although she showed up two hours late to the event, citing traffic congestion, the event was seen as signaling the importance of Korea’s beauty market.

Together with a makeup artist from her brand, the singer, wearing an oversized white suit, personally demonstrated makeup on a model and shared her makeup tips for two hours.

Sweeping the stage from one end to another, she tried to communicate with the participants by meeting their eyes, saying, “You can ask anything at anytime throughout the show.”

Some 600 people, including bloggers and Lotte Duty Free customers, showed up at the beauty class. Others paid as much as 120,000 won ($107) for a ticket, which sold out five minutes after they became available online last month.

It was developed by LVMH’s Kendo division, known as a cosmetics incubator.

The brand was initially released online, but it generated significant buzz and generated $100 million in sales in just a few weeks after introductions. LVMH said it is also launching a new fashion house with the performer.

“Although I can’t say the exact figure, we achieved the sales goal we had planned in a month in just 10 days,” said a spokesperson from Lotte. “In addition to people in [their] 20s and 30s in Korea, the brand is being well-received by customers from China and Southeast Asia.”

A spokesperson from Shinsegae said Fenty Beauty “is well-received among people in [their] 20s and 30s regardless of their nationalities. Diamond Bomb, a highlighter with glittering pearls, in particular, is a product that became viral.”

According to duty free sources, the singer planned the beauty class in Seoul and does not have plans to visit neighboring Asian countries.

“The importance of the Korean market, which pulls in Chinese customers, is significant,” said a spokesperson from Kendo. Fenty Beauty, which sells vegan products, hasn’t entered the Chinese market, where animal testing is compulsory.

“We suggested holding an open event where Korean consumers can try out products after it was confirmed in December that Fenty Beauty would debut in Korea,” said the Lotte spokesperson.