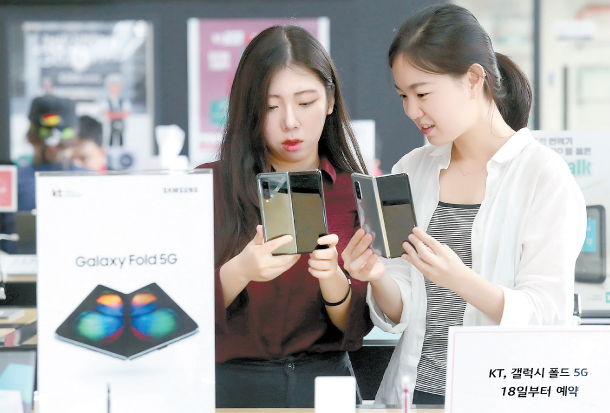 Models hold up Samsung Galaxy Folds at a KT store in Seoul. The Galaxy Fold sold out online within minutes of the second batch going on sale on Wednesday. [KT]

The second batch of Samsung Galaxy Folds sold out in minutes online on Wednesday, repeating the success of the first round of devices released on Sept. 6.

Both carriers said Wednesday that Galaxy Folds are still available at some stores across the country but will likely be sold out by the end of the day.

LG U+ did not confirm how many phones it has sold or how quickly they sold but said it will have sold out by the time the phones are delivered.

While Korea’s three carriers were allotted some 1,000 Galaxy Folds each for the initial release earlier this month, this time, the carriers had roughly 5,000 units to sell, according to industry sources. Including the unlocked phones sold directly through Samsung and through other online platforms like 11st and Auction, industry insiders say some 20,000 to 30,000 Folds were released in the second batch of sales.

The phones will be delivered to customers from Sept. 27, a day later than originally scheduled. While devices were expected to be delivered gradually from Sept. 26, a Samsung spokesperson said it delayed the date to deliver the phones to as many people as possible at once.

While SK Telecom has closed its online sales, KT and LG U+ said they will keep taking reservations, though delivery will only be made after Samsung supplies its third batch of Folds. A spokesperson from SK Telecom said it will notify its customers when it secures supplies and take orders then.

The schedule for the third round of Galaxy Fold sales in Korea has not yet been announced.

Whether Samsung has opted to sell the Galaxy Fold - worth nearly $2,000 - in small batches to reinforce its brand as an exclusive product or because of the difficult manufacturing process is unclear. The phone’s release has already been delayed once from its failed launch in April, mainly due to problems related to the display.