The Chuseok harvest holiday is one of the biggest local holidays that guarantees people at least three days of rest. Traditionally, it is a period where families gather together from all over the country. However, for the local box office, the holiday season means high ticket sales as those families spend some of their time together at the movie theater.

There were patterns that have repeated throughout the past two decades, one being that certain family-friendly genres have successively topped the box office during the Chuseok holidays.

But have these patterns held true? Do people still view the holiday period as a time for families to get together? With more and more people using the break to go abroad, there may no longer be a “family-friendly” genre for film distributors to prepare for next year’s holiday box office. 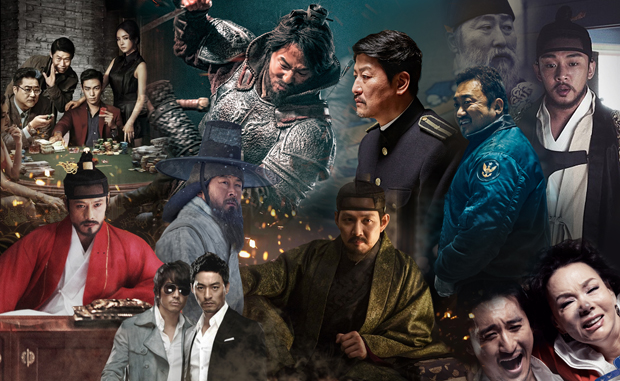 Certain types of genres dominate movie theaters over the Chuseok holidays. Above are a collection of characters from films that ranked number one in the holiday box office over the last 10 years. [EACH DISTRIBUTOR, JEON TAE-GYU]

Popular genres over the years

For nearly a decade since 2001, gangster mob action comedies, such as “My Wife is a Gangster” (2001) and the “Marrying the Mafia” franchise, were the popular Chuseok genre. The latter was especially a hit during the Chuseok holidays, with four out of five films being released in accordance with the period. The series reached its peak when it topped the holiday box office in the fourth installment titled “Unstoppable Family” in 2011 with 1.47 million moviegoers over the holidays.

However, after a decade the local audience began to lose interest in light-hearted comedies with shallow story lines and instead veered toward well-made historical dramas. “Masquerade” (2012) kick-started the genre’s popularity, drawing 2.8 million audience members to theaters over five days. Over the recent decade, six out of the 10 top films for the holiday box office were historical dramas.

Another pattern that resurfaces during this period is that middle-aged veteran actors that are well-recognized across age groups feature heavily in lead roles. For “Masquerade” it was actors Lee Byung-hun and Ryu Seung-ryong, while Lee Jung-jae and Song Kang-ho starred in “The Face Reader” (2013) and Song also in “The Age of Shadows” (2016). Lee Byung-hun, Kim Yoon-suk, and Park Hae-il starred in “The Fortress” and in last year’s “The Great Battle,” Jo In-sung and Park Sung-woong featured in lead roles.

All the cast from the above are big-name actors acclaimed for their impressive skills, making it evident the films released for the holidays are extra careful to plant at least one familiar face amongst their lead roles to attract family units. Song seem to be a representative example of an actor with the credibility that families can easily agree on. 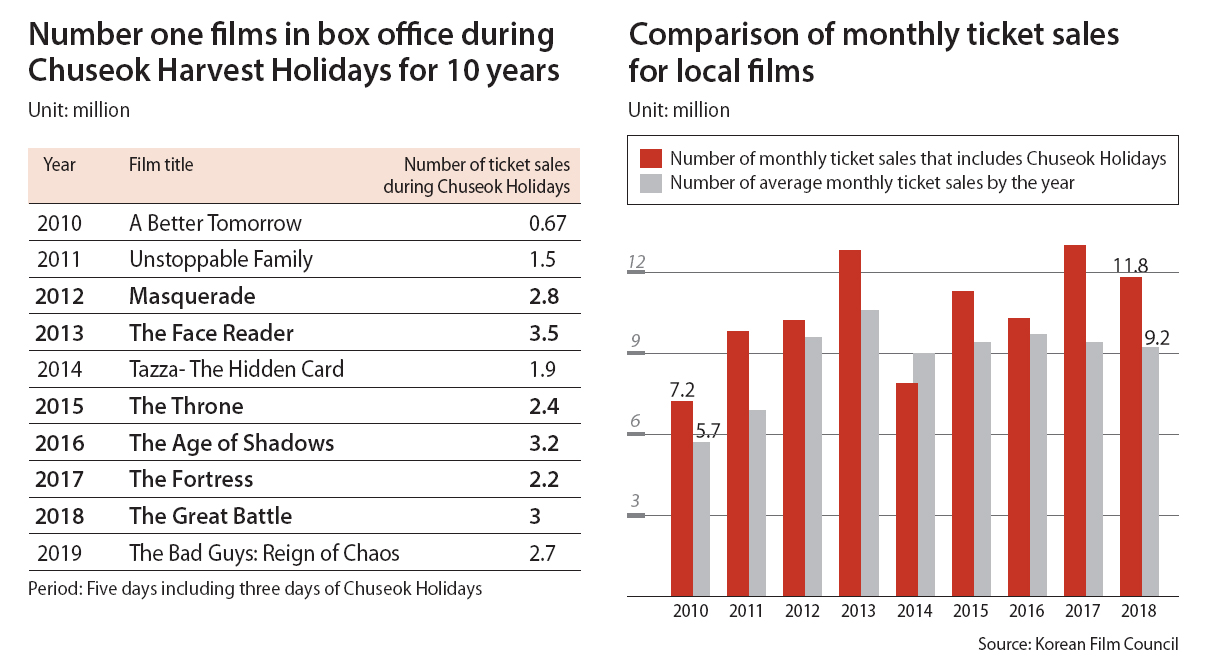 End of an era?

Therefore, avid moviegoers might have been surprised to see this year’s line-up: All three films that were released one day prior to the beginning of the holidays - “The Bad Guys: Reign of Chaos,” “Tazza: One Eyed Jack” and “Cheer Up, Mr. Lee” - were either comedy or crime-action blockbusters. No historical drama films were released after four such films took the number one spots successively over the last four years.

“It’s probably a rebound from the relative lack of popularity of the genre over recent years,” said film critic Kim Hyung-suk. “Although ‘The Great Battle’ ranked number one, it didn’t receive as much attention as it expected and didn’t do so well in the overall ticket sales, and neither did ‘The Fortress’ from the year before.”

“[Right now] audiences are growing tired of the genre,” said another film critic Oh Dong-jin. “Historical fictions tend to see and reflect the world from a different perspective but people feel that the world is already in disarray. They don’t want to reflect upon their history. I believe film organizers quickly caught on to the public sentiment and released more lightweight comedies, like ‘Cheer Up, Mr. Lee’ as a result.”

Oh continued to say that heading to the movies over the Chuseok holiday is no longer a way for families to spend some quality time together.

“The media continues to portray Chuseok that way but that is simply no longer the case,” said the critic. “People have become individualized and [their tastes] are more diverse than before due to an increase of one-person households and OTT (Over The Top) platforms such as Watcha and Netflix. The majority of people regard the period merely as rest days instead of Chuseok holidays, which is why I believe that it is up to economical or political conditions to affect the box office [instead of the Chuseok holidays]. Categorizing films in accordance with the holidays is pointless now.”

However, Kim still said that the holidays still hold some power over box office success. “If word-of-mouth gets around that the film is fun to watch, then they instantly draw attention and often generate huge box office success if it strikes a chord with the audience,” said Kim.

According to statistics, over 5.6 million people have seen local films throughout this year’s holidays, which is actually a surge from a few years back. In 2012, only about 3.5 million people saw such films during the same period.

In other words, a lot of people still visit the theaters during the holidays, but no longer as family units. While the holidays still hold power over ticket sales, it seems that film distributors are betting differently this year as moviegoers’ preferences no longer unify into one trending genre.

Although another “Tazza” series ranked second for this year, drawing 1.67 million people to the screens, there was quite a gap between the top film and the second, which was dominated by actor Ma Dong-seok’s blockbuster “The Bad Guys: Reign of Chaos” which sold 2.7 million tickets. “Cheer Up, Mr. Lee,” on the other hand, only sold 857,000 tickets although it was promoted as a “comedy to be seen with families in Chuseok holidays.”

Nonetheless, Kim reasoned that people’s avoidance of historical dramas was not due to the genre itself as it covers a wide spectrum of topics. “To sum it up, it’s not a problem of the genre itself, but we need to go into more detail to see what kind of entertainment the film has in store for the people. For instance, we can’t say that ‘The Fortress’ and ‘Rampant,’ where zombies run wild [in the Joseon Dynasty (1392-1910)], are of the same genre. They are a completely different set of works.”