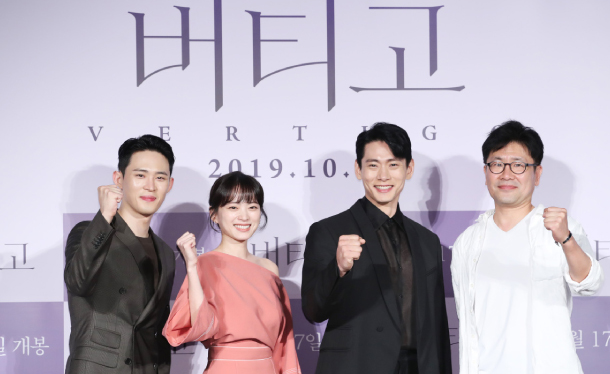 Actors Jung Jae-gwang, Chun Woo-hee, Yoo Teo and director Jeon Kye-soo pose at a press conference for their upcoming film “Vertigo,” slated to premiere on Oct. 17. The film is also invited to screen at this year’s Busan International Film Festival in the section of “Korean Cinema Today - Panorama.” [NEWS1]

The film title “Vertigo” carries two meanings - one is a dizzying sensation one feels within stable surroundings, and in Korean, it means to withstand and persevere from exterior pressure.

The protagonist in the upcoming film “Vertigo” is Seo-young (played by Chun Woo-hee), a contract designer working for an IT conglomerate.

“The film quietly observes a woman who has just entered her 30s and suffers from consistent dizziness and ringing in her ears as her social, family and love life fall apart around her one by one,” said the director Jeon Kye-soo.

While Seo-young hangs precariously upon the edge of giving up everything, a worker named Gwan-woo (played by Jung Jae-gwang) who cleans the building’s windows reaches out to her.

According to the director, he initially had no plans to make the scenario into a film. “I thought [the script] didn’t fit with commercial films,” Jeon said. “But when the opportunity came and Chun said yes to the role, I was more than relieved.”

The director added that he was surprised by how Chun portrayed the character because it almost matched perfectly how he had always imagined.

“I decided to feature in the film because of the last line of the script,” Chun said. “That’s what moved me. I think all the working women living in this contemporary era can sympathize with the film, because we all have a sense of fear about the uncertainty and incompleteness in our relationships - whether they are about family, work or lovers.”

Chun is currently featuring in JTBC drama series “Be Melodramatic,” where she also plays the character of another 30-year-old woman struggling to adapt to the harsh, cruel reality of adulthood.

“But the two characters have very different stances on how they see the world and how they handle their hardships,” Chun continued.

“Since the film itself is about following the character’s emotions, I thought my acting would be more natural if I just let myself think in the moment in Seo-young’s shoes rather than thinking ahead.”

The story of Seo-young is the director’s own, which he wrote 18 years ago, when he was working at a big conglomerate in Japan.

“I took extra care to depict the dizzying altitude of working in high buildings, which represents Seo-young’s state of mind. [The audience] can see how Chun plunges down through her character, but in a very beautiful way.”