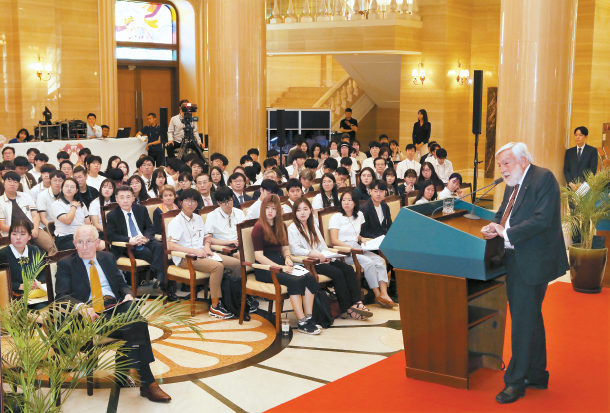 Kyung Hee University is celebrating the 38th annual UN International Day of Peace with the Peace BAR Festival 2019 (PBF) at its Seoul campus from Sept. 18 until tomorrow. 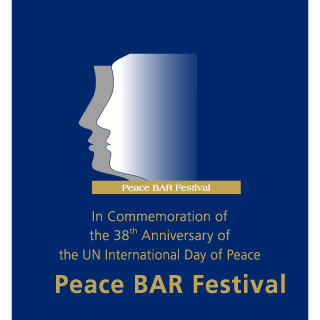 The main theme for this year is “The Future Unhinged: Climate Justice for All.” The event will focus on issues regarding climate change and the grave concerns that the Earth faces in the near future.

The PBF comes at a time when climate issues have taken center stage around the world. The international community has agreed that the biggest threat to humanity is the climate emergency. Climatologists have predicted that there will be catastrophic results once the average Earth temperature increases by over 1.5 degrees Celsius (2.7 degrees Fahrenheit) compared to that of the pre-Industrial Revolution era. With an increase of over 2 degrees, the sixth mass extinction could become a reality.

In order to get away from this danger, a rapid change is needed. Shifting from a growth paradigm to a sustainable paradigm is necessary for the survival of human civilization. Future generations have taken to the streets to protest against shortsighted politics and the attitude of older generations. In August 2018, student activist Greta Thunberg started protesting outside the Swedish Parliament with the slogan “school strike for climate.” Teenagers around the world are now following suit, speaking out for measures to be taken toward more active climate change policies.

The PBF invites people to gather around to discuss the severity of such climate change issues and to prepare for what is to come alongside scholars and social activists. In order to seek practical wisdom to solve the biggest obstacles that humans are facing, there are events prepared such as the Peace BAR Forum and International Conference.

The program details are as follows.

Festivities kicked off yesterday at the Grand Peace Hall with the Peace BAR Forum. Under the theme of “Save the Earth, Make the Future,” Professor Peter Wadhams from the University of Cambridge and Ian Dunlop, former chair of the Club of Rome, joined a panel of young students and activists to consider what impact climate change could have on human civilization and how young people can adapt to that future.

The opening ceremony for the event will be held today, followed by an international conference. During the opening ceremony, an overview of the UN International Day of Peace will be held, and Irina Bokova, Kyung Hee University’s Miwon Scholar of Practice, will give a congratulatory message. Messages from young activists, commemorative remarks and congratulatory performances will follow.

The international conference will start at 1:30 p.m. under the theme “The Future Unhinged: Climate Justice for All.” The conference will focus on Thunberg’s actions and consider the message of warning that she has spread around the world. Using scientific studies as a basis for discussions, scholars, politicians, experts and activists will discuss the gravity of the climate change issue and consider what measures need to be taken against it.

Special exhibitions are also opened for the week. From Monday until today, the “Dear Amazon: The Anthropocene 2019” exhibition has been held in the Grand Peace Hall of Kyung Hee University. It features artists from Brazil and Korea depicting future hazards based on their ecological understanding. The Ilmin Museum of Art planned the exhibition, which includes drawings, installations and performances.
Along with “Dear Amazon,” there are other programs also available such as the “Lounge Project” and “Screening Program” which also focuses on climate change through diverse art forms. All the exhibitions are free. 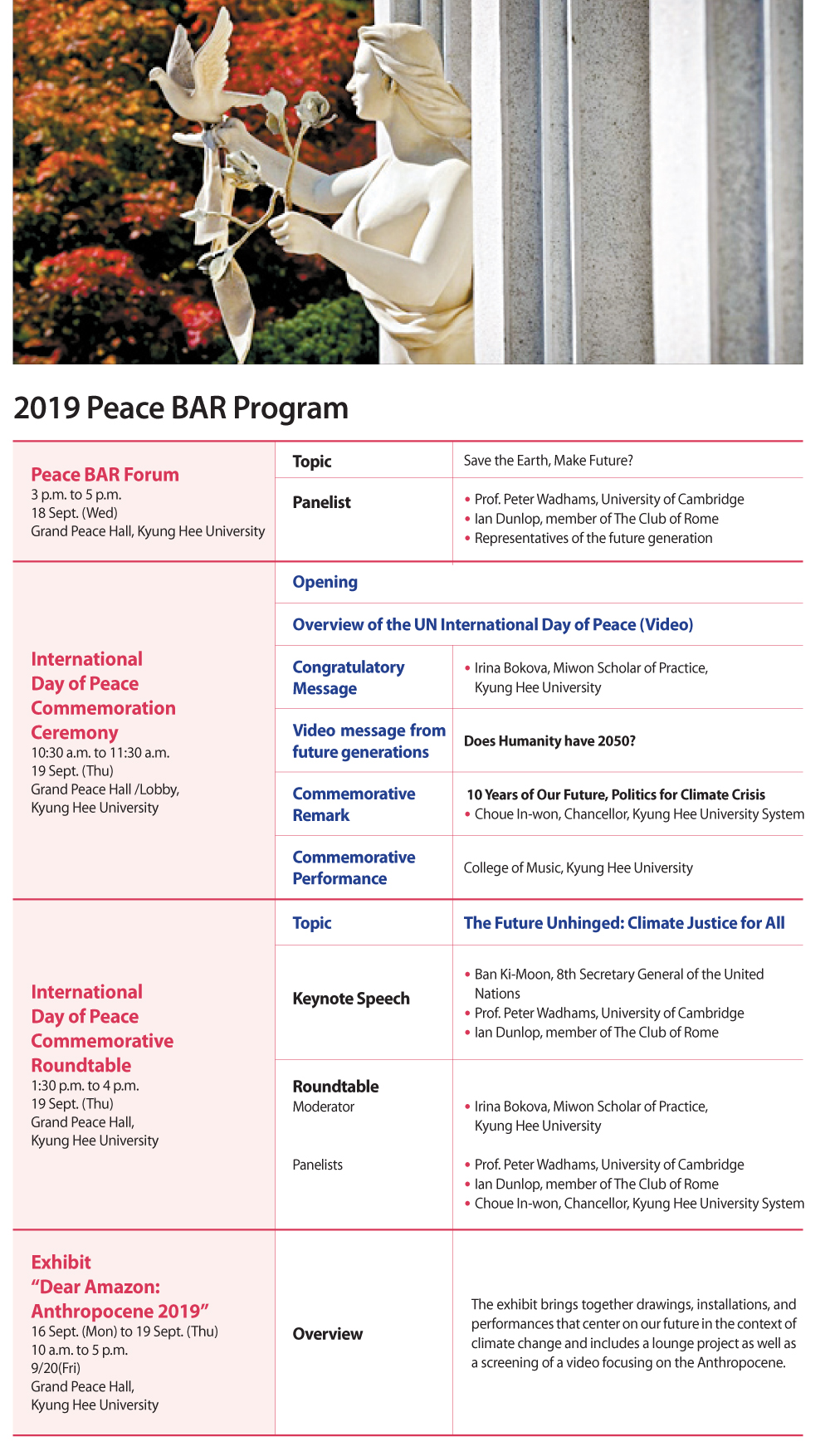 Humanity is still at war despite the 74 years that have passed since the end of the World War II. Terrorism and conflict around the world are silently seeping into the culture, economics and politics, bringing fear to society as a whole.

Natural disasters are getting more severe than ever and becoming even more frequent, hinting at the chaos to come in the near future.
The UN and experts agree that there will be catastrophic results once the average Earth temperature increases by over 1.5 degrees Celsius compared to that of the pre-Industrial Revolution era. This will result in extreme heat, wildfires, flooding, drought, a rise in sea levels and other extreme conditions. Climatologists have also warned of food and water shortages and a breakdown of social infrastructure leading to a massive increase in the number of refugees, upsetting social stability and security.

Scientists predict the final limit to the rise in the average temperature to be 2 degrees Celsius. Once that threshold is passed, humans and most creatures living on earth will face mass extinction due to the “Hothouse Earth” effect.

As of August 2019, the current average temperature has risen 1.1 degrees Celsius. If we look further back and take the start of the Industrial Revolution as 1750, not 1850, the increase has actually been 1.75 degrees Celsius.

There have been warnings against such possible disasters since half a century ago. According to “The Limits to Growth,” a report published in 1972 by the Club of Rome, if humanity focuses solely on economic growth, at some point in the 21st century, it will surpass the capacity of the Earth. Despite these early warnings, overdevelopment is still common.

Kyung Hee University is trying to tackle the climate emergency during the PBF to make people see that humanity is on the verge of extinction. It hopes to highlight how civilization reached this disastrous point and what changes must be made going forward. This week, Kyung Hee University will seek to find a way for humanity to continue to survive, as we always have.