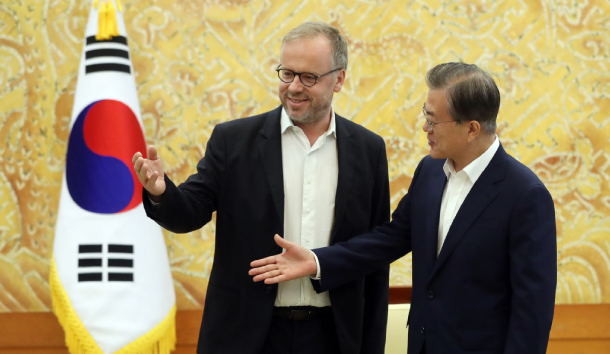 Moon was discussing his administration’s efforts to improve press freedom and trust with Christophe Deloire, secretary general of Reporters Without Borders, at the Blue House. Cedric Alviani, director of the Paris-based non-governmental group’s East Asia bureau in Taipei, and Jung Kyu-sung, head of the Journalists’ Association of Korea, also participated in the half-hour discussion.

It was the first time that a Korean president had an official meeting with the delegation from Reporters Without Borders.

After thanking the group’s contribution and support for Korea’s press freedom, Moon said he believes press freedom is the basis of democracy. “Thanks to the efforts of Reporters Without Borders, we have seen great improvements in protecting press freedom from political powers,” Moon said. “But they were not the only thing that infringed upon press freedom. Media conglomerates and advertisers, competition to break stories, extreme confrontations, hatred toward people who have different opinions and the rapid spread of fake news and false information are all hurting the fairness of press.”

Moon then asked Reporters Without Borders to continue its initiative to protect press freedom and ensure the fairness of media reports.

The president’s remarks were made during a sensitive time, as ruling party politicians and Blue House officials have complained about media coverage on the new justice minister, Cho Kuk. Ever since his nomination, the media has been reporting on a series of scandals surrounding him and his family, prompting investigations by the prosecution. Moon still appointed Cho earlier this month, declaring that suspicions are not enough of a reason to recant the nomination.

During the meeting with the journalists, Moon expressed his support for the “International Declaration of Information and Democracy,” issued by Reporters Without Borders last year, said deputy presidential spokesman Han Jung-woo. Moon also said Korea will participate in the non-governmental group’s initiative, called the “Partnership for Information and Democracy,” a consultative body among governments around the world to implement the declaration.

The declaration was issued last year by the group’s 25-member expert panel to mark the 70th anniversary of the Universal Declaration of Human Rights.

“I hope the initiative will be supported by many countries,” Moon was quoted as saying by Han. “Korea has a proud history of fighting to protect press freedom. I believe Reporters Without Borders, Korean journalists and the Journalists’ Association of Korea are great partners.”

According to Han, Deloire appreciated Moon’s support, noting that Korea is the first Asian country to back the declaration. He said he plans to secure signatures from more countries to join the “Partnership for Information and Democracy” at the upcoming UN General Assembly meetings.

During the meeting, Moon showed interest in the Korean government’s performance in accomplishing its aspiration to be ranked 30th out of 180 countries in the World Press Freedom Index, Han said.

Deloire noted that Korea’s score has been rising over the past two years. It was ranked 41st on the index this year and he expects Korea to accomplish its goal by 2022.

Earlier this year, Reporters Without Borders had condemned the ruling Democratic Party (DP) for bashing journalists who were critical of Moon’s policies. It said the DP spokesman’s attacks on critical journalists have caused a commotion in the country. “The Party’s spokesperson later apologized and had the journalists’ personal details removed from his statements. However President Moon, who also acts as the Democratic Party chairman, has so far declined to comment,” it said in the statement.