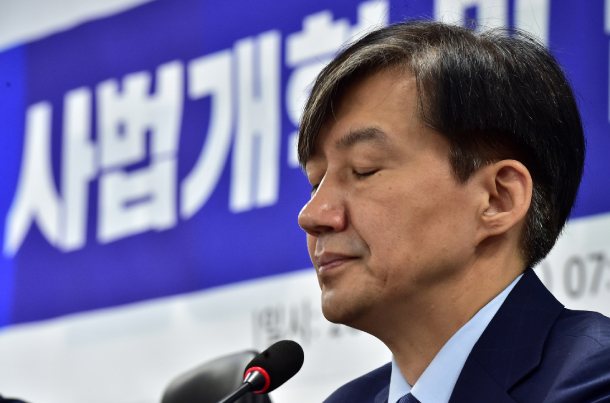 Justice Minister Cho Kuk said Wednesday that new guidelines barring prosecutors from telling the press about suspected crimes of suspects before indictments will be enforced after formal investigations of his family conclude.

“It is unrelated to my case,” Cho said about the proposed media regulations during a meeting between the ruling party and the government to discuss criminal justice system reforms.

Cho said his ministry started planning to revise current media guidelines under his predecessor Park Sang-ki. “Some mistakenly said it was being pushed forward because of investigations into my family.”

Opposition political parties have objected to the proposed changes, calling them a de facto “gag order” to protect Cho’s family.

The Seoul Central District Prosecutors’ Office is investigating possible college admissions fraud by Cho’s daughter and wife, Chung Kyung-sim. Chung was indicted on Sept. 6 on a charge of forging an academic award for their daughter to support her medical school admission.

It is also investigating a private equity fund that Chung and Cho’s two children invested in.

“We will listen to the concerned institutions’ opinions on the new press guidelines,” Cho said. “They will be enforced after the investigations into my family are concluded.”

Chairman Lee said reforms must focus on protecting the rights of the people.

The DP and the Ministry of Justice also agreed to a plan to introduce a new type of system of fines for criminals. A wealth-based fine system, in which the rich will pay heavier fines than poor people committing the same crimes, was one of President Moon Jae-in’s campaign pledges. During his confirmation hearing earlier this month, Cho has said he supported the idea.

While Korea has a one-fine-fits-all system, some European countries including Germany, Austria and Switzerland are using income-based fine systems.

The DP and the Moon administration also agreed to introduce a legal measure to guarantee residential tenants the right to renew a rental contract on the same terms for up to four years.

A plan to expand state-appointed attorneys in criminal proceedings before indictments was also discussed. “Among the suspects arrested during investigations, state attorneys will be offered to minors, physically and mentally disabled people and alleged felons,” Rep. Cho said.