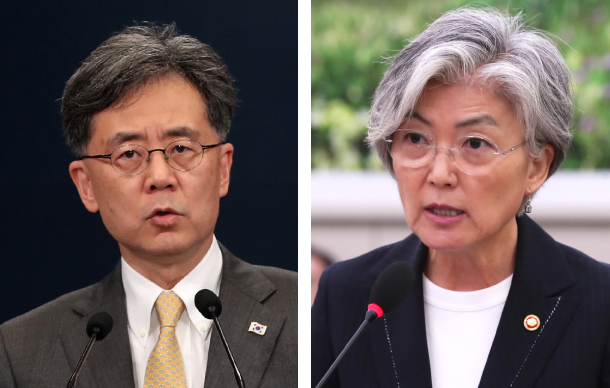 Kim Hyun-chong, the Blue House deputy national security adviser, personally addressed reports of discord with Foreign Minister Kang Kyung-wha and took the blame for the incident in a post on his Twitter account Wednesday.

The tweet followed recent reports of a heated squabble between Kim and Kang which occurred in April while they accompanied President Moon Jae-in on a trip to three Central Asian countries - Turkmenistan, Uzbekistan and Kazakhstan. They were reported to have been spotted arguing in English in a public space at a hotel.

Kang, when questioned by an opposition lawmaker at a National Assembly Foreign Affairs Committee meeting Monday about whether she and Kim had an argument in April, replied with a slight smile and said she will “not deny” it without elaborating further.

There have been speculations of disharmony between the Blue House National Security Office and Ministry of Foreign Affairs amid tense security and diplomatic issues.

The public squabble between Kang and Kim was thus seen to have highlighted such schism between the foreign affairs and security lines.

However, while acknowledging that a disagreement did take place, both Blue House and Foreign Ministry officials have downplayed the quarrel between Kim and Kang.

“There are concerns about a difference in opinions between the foreign affairs and security lines, but that seems to be due to my inadequacy,” Kim tweeted Wednesday morning. “It appears I got ahead of myself with my zeal to come up with the best policies amid a whirlwind of international affairs and lacked leniency in my heart. In the future, I will lower myself and work harder.”

Kim did not specifically mention Kang by name in the tweet, which gathered over 4,000 likes and 2,600 retweets in just four hours after it was posted.

During the argument during Moon’s overseas trip, Kim reportedly had berated an official for mistakes found in a Foreign Ministry document, and Kang in turn shot back at him not to scold someone from her ministry. Kim, a former trade minister, reportedly retorted in English, “It’s my style!”

Responding to such reports, a senior Blue House official told reporters Tuesday, “There can be slight differences in opinions while working, but even if there are such differences, that doesn’t mean you can’t work together.”

This official added that there are “very lively consultations” between the Foreign Ministry and the National Security Office, and that the two branches “cannot work without each other.”

The Blue House National Security Council last month decided to terminate the bilateral General Security of Military Information Agreement (Gsomia) intelligence-sharing pact with Japan, putting the Foreign Ministry in a difficult position as it deals with diplomacy with Tokyo over its export restriction measures and also with alliance issues with Washington.