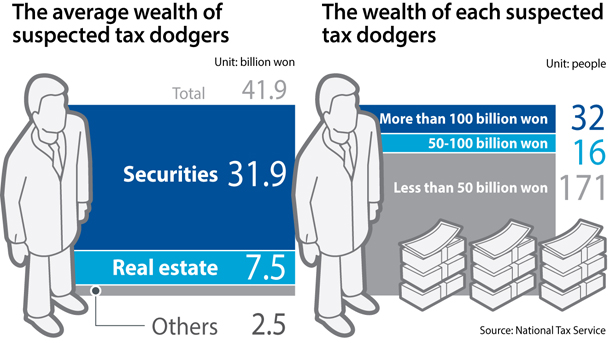 In another case, a person running a real estate rental business sold a small building to his grandson, who is in preschool. The grandson inherited the building at only 5 percent of the price of the building.

The National Tax Service said Thursday that it is investigating 219 high-income earners, especially those who own businesses and are suspected of dodging taxes.

The assets of a five-year-old are included in the investigation.

The tax agency is focused on cases of those aged 30 or younger who have acquired high-end real estate or securities and lack clear income sources.

“Amid the growing uncertainties in the global economy, including the recent export restrictions by Japan and the trade conflict between the United States and China, many Korean companies have been working hard to strengthen their corporate competitiveness through healthy entrepreneurship,” said Lee Joon-oh, head of the tax agency’s investigation bureau.

“However, several wealthy people including business owners have been damaging corporate competitiveness by smuggling out corporate capital and business opportunities by ‘tunneling’ that dodges the tax law.”

“The misappropriation such as securing assets for their children through the smuggled capital is undermining economic activity.”

Lee said as such the tax agency has started investigations, especially of those whose children lack a clear source of income and have been able to acquire high-end real estate and securities.

According to the tax agency, the total wealth of the suspected tax dodger totals 9.2 trillion won ($7.7 billion), with each suspect having wealth averaging 41.9 billion won.

Of the 41.9 billion won, most of the wealth was in the form of securities, and that was followed by real estate assets.

The majority of those investigated, or 171, had wealth of less than 50 billion won.

Among the suspects, 147 are under 30 years old, and 12 of those being investigated are students.

The tax agency said the means of dodging taxes has changed from past practices, where the business owners omitted revenues, falsely raised production costs or used other capital transactions, such as mergers and capital increase.

The latest techniques have evolved to become more deceitful. On the outside, they look as though they are normal business transactions, but other than for the purpose of dodging taxes, the decisions lack any economic rationale.

The most common practice was illegally smuggling company capital to foreign branch offices or companies created under false identities, ending with the business owner’s family pocketing the wealth.

The second most common practice was utilizing illegal internal transactions, including the use of companies owned by children.

There were several cases of inheriting businesses without paying the proper taxes or using unlawful capital transactions and passing the wealth to children.