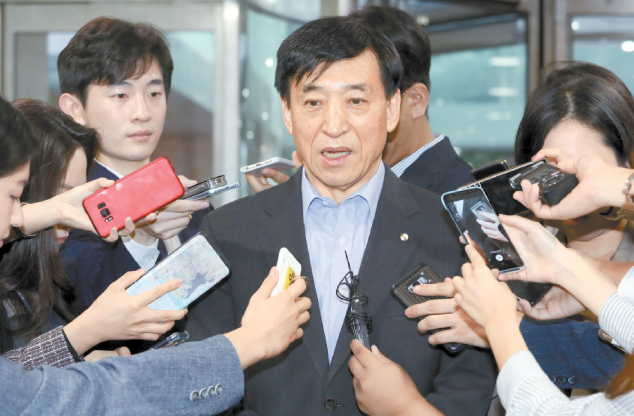 The chief of Korea’s central bank said that the Federal Reserve’s decision to cut the federal funds rate allows for more flexibility in managing Korea’s monetary policy, hinting that the bank could soon move to lower the key interest rate again.

“The U.S. Fed reducing its rate eases the burden for other countries in determining their own monetary policies,” Bank of Korea (BOK) Governor Lee Ju-yeol told reporters, adding that the announcement was in line with market expectations.

The burden refers to the gap in the interest rates between the United States and Korea as the widening disparity could cause a capital exodus toward the U.S.

The Fed trimmed the benchmark interest rate by 25 basis points to the target range of 1.75 percent to 2 percent in a widely expected decision on Thursday. The BOK’s key interest rate stands at 1.5 percent after the central bank lowered the rate in July due to increasing uncertainties. It held the rate unchanged last month.

The current market consensus projects that the BOK will push down the rate in the October meeting.

In assessing the economy, the governor underscored the increased gravity of external conditions ranging from the trade dispute between the United States and China and Brexit to an attack on an oil processing facility in Saudi Arabia.

“On top of the U.S.-China trade war, geopolitical risks have been intensified,” he said.

While he expressed concern for the potential disruption in the oil supply, Lee played down the risk of the outbreak of African swine fever.

“We need to keep following the developments in the Middle East, because oil prices have a great influence on the Korean economy,” Lee said, “The issue of African swine fever is still not a major factor that we take into account in monetary policy decision.”

His comment came a day after a member of the monetary policy board sent a strong signal for a cut in interest rate.

Shin In-seok, who dissented in favor of a cut last month, said that there is enough room to maneuver in the country’s monetary policy. Shin was joined by Cho Dong-chul in casting a dissenting vote.

Against the backdrop of an uncertain global and domestic economic outlook, the BOK lowered its growth forecast to 2.2 percent in July. Analysts expect the central bank will further slash its prospects in November, as it is scheduled to announce the latest forecast.