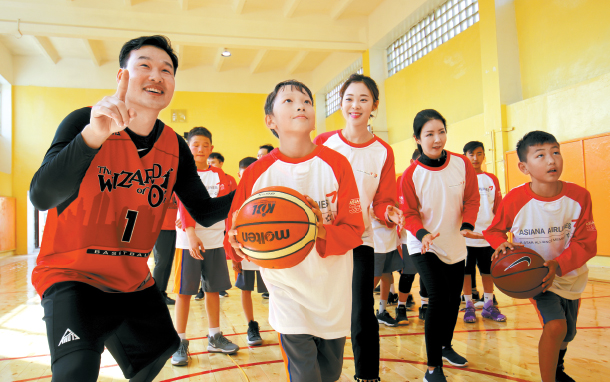 Asiana Airlines employees and students at School 83, an elementary school in Ulaanbaatar, Mongolia, play basketball in the school’s gym, remodeled with support from the airline as part of its Beautiful Classroom social contribution program, on Wednesday. [ASIANA AIRLINES]

The program in Mongolia was held as the airline newly started a flight service to Ulaanbaatar from Incheon in July.

Asiana selected a 30-year-old elementary school, dubbed School 83, in Ulaanbaatar and supported the remodeling of the school’s indoor gym.

On Wednesday, when the commemorating ceremony for the program was held at the school, Asiana employees participated in a friendly basketball match with students in the remodeled gym.

The employees also visited nearby nursery facilities to give out daily necessities and knitted hats to children from low-income households.

Beautiful Classroom is one of Asiana’s major social contribution programs designed to give educational support to schools at the airline’s flight destinations. From 2012, the program has been held in various places including China, Cambodia, and Uzbekistan.

The airline said it will continue to hold its social contribution program in Mongolia from now on.