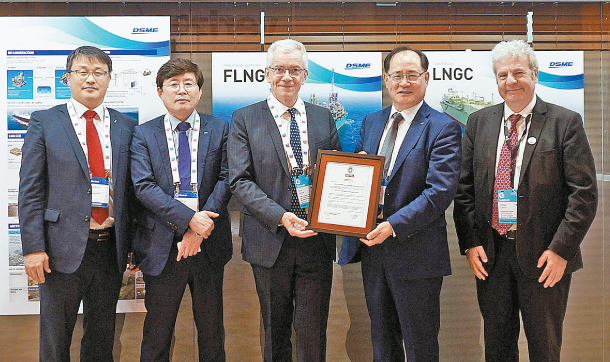 BV, an international certification agency based in France, is the fifth agency to grant approval to DSME’s LNG cargo containment system, dubbed Solidus. DSME said the design approval certifies its system is capable of being adopted on real LNG carriers.

The Korean shipbuilder has already received approval from United Kingdom-based Lloyd’s Register, the U.S. Bureau of Shipping, the Korea Register of Shipping, and Norway-based DNV GL, since developing the technology in 2017.

DSME is hoping the technology could free it from the hefty royalty fees it has been paying to French LNG containment specialist Gaztransport and Technigaz (GTT). Despite being leaders in building LNG carriers, Korean shipbuilders still need to pay 5 percent of the cost of each LNG carrier they build to the French company as it owns the original technology for the LNG containment system.

“Considering the recent pricing of LNG carriers, the royalty paid per ship amounts to roughly 10 billion won ($8.37 million),” a source from the shipbuilding industry said.

“We are ready to tackle the [LNG cargo containment] market with the latest approval,” a spokesperson from DSME said. “We hope to open up new opportunities for the local shipbuilding and shipbuilding equipment industries with Solidus.”

On Thursday, Hyundai Heavy Industries also announced its own LNG containment system dubbed HiMEX, which earned general approval from Lloyd’s Register during energy exhibition Gastech held from Tuesday through Thursday in Houston. It is the first approval the shipbuilder has received fir its containment system. The company said it will complete testing of the technology by 2020.

Despite local shipbuilders’ efforts to localize LNG tanks to improve profitability when building LNG carriers, it will still take some time.

“Even if we have design approvals it will take time for our systems to actually be used on ships because shipping lines order ship designs based on past track records, and Solidus does not yet have a track record,” a spokesperson from DSME said. “GTT’s system, however, has been used for a long time.”

The system, dubbed KC-1, was rolled out in 2014 after 10 years of research and development, but the first two ships that adopted the systems experienced faults including gas leakage.