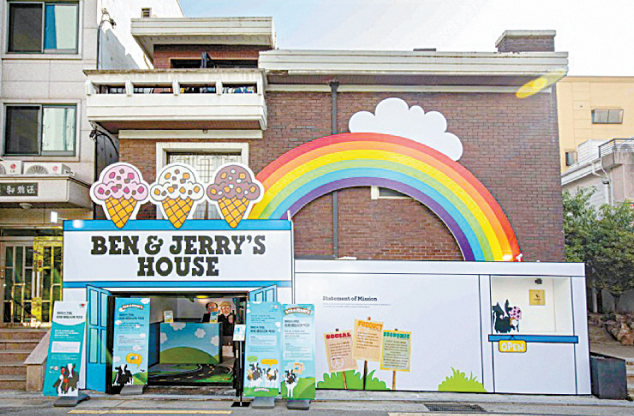 American ice cream brand Ben & Jerry’s launched in Korea with the opening of a pop-up store in Hongdae, western Seoul, on Thursday.

The ice cream brand, known for its use of natural ingredients, opened its fifth Ben & Jerry’s House in Asia here, following branches in Japan, Malaysia, Singapore and Thailand.

Ben & Jerry’s ice cream has actually already been sold at convenience store chain GS25 since August, but the pop-up store in Hongdae marks the start of the brand’s formal expansion here.

Ben & Jerry’s said it originally planned to debut in Korea in October but decided to pull forward the official launch date after it recorded higher sales figures than it had expected here.

“It’s an exciting time to be in Korea,” said Kalli Swaik, Ben & Jerry’s head of Asia and the new market, at a press event held in Hongdae on Thursday, noting the steady growth in demand for premium ice cream in Korea and growing calls for natural, unprocessed ingredients from local consumers.

Swaik stressed the social responsibility the ice cream brand has imposed on the local communities and vowed to “build community” in Korea, which involves “building connections with people that go beyond transactions.”

The brand uses all-natural ingredients in the ice cream making process, according to Swaik. Ben & Jerry’s argues its products are made of non-GMO sourced ingredients and uses dairy products from “happy cows” that are raised without the use of recombinant bovine growth hormones.

Founded by Ben Cohen and Jerry Greenfield in 1978, Ben & Jerry’s started at a small gas station in Vermont. Its products are now sold in 41 countries around the world, including Korea.

The pop-up store in Hongdae will run until Oct. 16. Ben & Jerry’s can currently be ordered for delivery in Seolleung and Gangnam, southern Seoul, via food delivery platforms Baemin and Yogiyo.