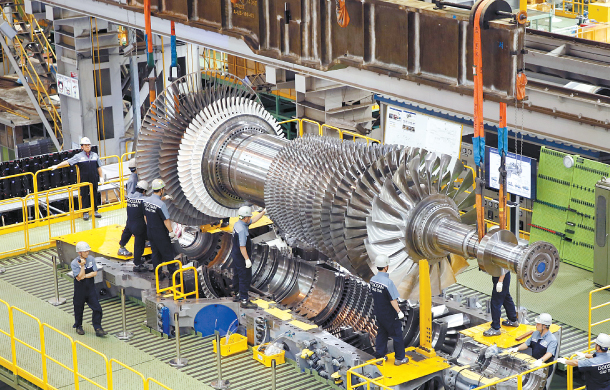 Doosan Heavy Industries & Construction workers assemble a gas turbine at the company’s factory in Changwon, South Gyeongsang, on Wednesday. The first-ever, self-developed gas turbine from the company is about 95 percent complete and is awaiting inspections targeted for later this year. [DOOSAN HEAVY INDUSTRIES & CONSTRUCTIONS]

If successfully tested in coming months, the gas turbine would make Korea the fifth country in the world, following the United States, Germany, Japan and Italy, to have developed its own gas turbine, the company said. The development would allow it to better target the growing global gas turbine power generation market.

Korea’s leading power equipment maker held a press event at its headquarters in Changwon, South Gyeongsang, on Wednesday to unveil and showcase a test model of the DGT6-300H S1 gas turbine.

“To better adapt to the rapidly changing global power production market due to shifting policies around the world, we have been preparing a new business portfolio,” said Lee Kwang-yol, vice president of Doosan Heavy in charge of the gas turbine development.

“This new model will help Doosan Heavy Industries & Construction acquire leadership in the changing energy market and contribute to generating power in a more eco-friendly manner.”

The gas turbine compresses high air and liquefied natural gas (LNG) and generates thermal energy at temperatures to up to 1,500 degrees Celsius (2,732 degrees Fahrenheit). The heat is then converted to mechanical energy by being passed through 450 blades within the turbine. A generator attached to the turbine then converts the mechanical energy into electricity.

Doosan Heavy said the large gas turbine, with more than 40,000 parts, has a rated capacity of 270 megawatts and is highly eco-friendly, as using LNG as a power source emits less air pollutants than coal.

According to the Ministry of Trade, Industry and Energy, LNG power production emits one-eighth the level of ultra-fine dust and one-third the amount of sulfur oxide and nitrogen oxide compared to generating electricity from coal power plants.

The gas turbine completion is also a significant technological achievement for Korea, as the country has been looking for ways to rely less on foreign entities in building its energy infrastructure.

At this moment, all 149 gas turbines operating in Korea have been manufactured and are serviced by foreign companies, which has cost the country around 12.3 trillion won ($10.2 billion) to date.

In a bid to rely less on foreign companies, Doosan Heavy stepped up in 2013 to run a government-sponsored project and develop the country’s first self-developed gas turbine.

The company has invested a total of 1 trillion won in the project while working with 21 Korean universities, four state-run research centers and 13 small- and medium-sized enterprises to develop the turbine with 60 billion won of government support.

Even though the company did make gas turbines starting in 1991, Lee said it was merely assembling parts supplied by General Electric.

“No foreign companies thought it was possible for Korea to make its own gas turbine when we first took on the project in 2013,” Lee said. “Others thought we wouldn’t be able to do it because we didn’t even have our own jet engine technology during World War II. But we are now at the verge of making it happen.”

If successfully tested and safety can be demonstrated, Doosan Heavy said by using its locally-manufactured gas turbine, Korea would save around 10 trillion won that it would have spent on importing technology and getting maintenance services from foreign companies.

Lee said that more than 90 percent of parts for the gas turbine are already localized and that it is still making additional investments to localize all parts in the near future.

Although the company imports some parts for the gas turbine from Japanese companies currently, Doosan said the parts are not at risk of falling under Japanese export restrictions, as the materials are not included in the list of strategic goods from Tokyo.

While working on the new gas turbine, Doosan Heavy has already mapped out a local manufacturing supply chain of more than 230 local manufacturers, suppliers and machinery companies.

The first fully completed gas turbine will be first installed in a 500-megawatt power plant to be built in Gimpo, Gyeonggi, and owned by state-run Korea Western Power. The plant is scheduled to start operations in 2023. The completed gas turbine will be supplied to the plant in early 2021 and put through additional tests and trials to meet the timeline.

But generating power at the Gimpo plant will not be it for the new gas turbine technology, as Doosan’s technological achievement is expected to greatly contribute to the government’s aggressive push to raise the production level of renewable energy.

Since taking office, the Moon Jae-in administration has vowed to aggressively shift from traditional sources of energy, such as coal and nuclear power, and more towards renewables.

In April this year, the government raised the production target for renewable energy from 6.2 percent in 2018 to 30 to 35 percent of all Korean energy sources by 2040.

Korea is expected to need an additional 18 gigawatts of power plant capacity by 2030, and under the Moon Jae-in administration, much of that will likely be generated by renewables.

The company is also looking beyond Korea for utilizing its “Full-Speed Full-Load” test center, which can test newly-built gas turbines with more than 3,000 sensors.

Doosan Heavy ultimately seeks to be a major gas turbine manufacturer and servicer for countries lacking the technology to build one themselves. The company has been running a service-specialized subsidiary, Doosan Turbomachinery Services, in the United States since 2017 eyeing the gas turbine maintenance business.

Doosan said it is seeking to grow its gas turbine business to reach more than 3 trillion won in sales per year and occupy 7 percent of the global gas turbine market by 2026.

The segment would add around 30,000 jobs and help the company stay competitive in the growing gas power production market, the company added.

According to IHS Cambridge Energy Research Associates, the global gas power production market is expected to grow from 1,757 gigawatts in 2018 to 1,976 gigawatts in 2023 and reach 2,189 gigawatts by 2028, with an average growth of 40 gigawatts per year.