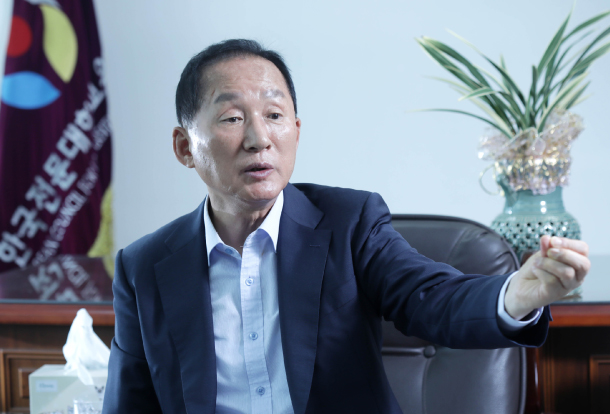 Increasing admissions to community colleges for mature students, aged between 30 and 70, is the most realistic solution to settle the problem of an aging society and the low birth rate, said Lee Gi-woo, 71, president of the Korean Council for University College Education, a council of 136 community college presidents in Korea.

From 2020, the number of students who will be eligible for college admissions is expected to be about 479,376, which is some 20,000 students short of the number needed to meet the current quotas.

Unless the quotas are changed, a serious collapse is inevitable. Based on these numbers, it’s forecast that about 84 four-year universities and two-year community colleges, or a quarter of the number in the whole nation, will be unable to accept any new students in four years.

Lee, who formerly served as the deputy minister of education, has been leading the Incheon JEI University for 14 years. In 2006, when he started for his post as president, it was recognized as the “school where [you] go when [you] have no more to apply to,” he said. But since Lee took over as president, it’s no longer the bottom-ranking students applying to his community college. He also created new specialisms and built a second campus in Songdo, Incheon, in 2015.

The JoongAng Sunday sat down with Lee last month to talk about the problems facing community colleges in the coming years and some possible countermeasures they can take.

Q. How are community colleges doing at this point?

It seems like the government is not interested in community colleges. What do you think about this?

The proportion of national and public universities [out of all] is 59 percent for Organisation for Economic Co-operation and Development countries and 66 percent for countries in the European Union, but only 2 percent for Korea. In an era when an aging society and a low birth rate are serious problems, the collapse of community colleges is fatal for the provision of training professional specialists and to regional economies as well. Both the central and local governments should pay special attention.

How are you going to deal with this crisis?

[We] need to change community colleges into colleges that provide lifelong vocational education. The advantages of community colleges are shorter periods to complete courses, the possibility of earlier employment, collaboration with companies, professional job training and cheap tuition fees, which are only 83 percent of the average tuition of a four-year university. Now is the time to change that paradigm. I suggest to change the term which specifies “colleges and technical institutes” in Article 2 of Chapter 1 of the Higher Education Act, to the term “lifelong vocational education college” to help turn community colleges into institutes that provide lifelong vocational education and training to professional specialists, not just a sub-institute of university. Also, [we] need to open the doors to mature students, who started studying late.

Is there any way to increase the number of mature students who enroll in community colleges?

Yes. The era in which students who graduate high school and go to college at the age of 20 has passed. Anyone, including job holders with a high school diploma aged 30 or over, those from alienated social classes with vocational education, industrial workers, an unemployed but experienced man, a retiree, etc., can be a college student. Look at the rate of mature students in the case of community colleges. Out of the all new students in community colleges, the proportion of those who are aged 26 or over was about 8.5 percent in 2016, 9.1 percent in 2017 and 9.5 percent in 2018. However, in the case of four-year universities, it is only 1 percent. I consider the number of potential mature students of vocational education is about 553,000. This is the number estimated based on an economically active population, consisting of people who are aged 30 or over with high school diplomas, which is about 9,210,000, and the percentage of mature students who wish to enter community colleges, which is 6 percent. Mature students can be the major breakthrough for community colleges.

What kind of legal instruments are needed?

What else is needed?

For community colleges, the fourth industrial revolution is both a crisis and an opportunity. I set, what I call, “new color” as a direction. According to Virginia M. Rometty, chair of International Business Machines Corporation, in the world of artificial intelligence, lots of jobs will be in new colors. Community colleges should innovate centrally in specialisms through fusion and convergence. Pet sitting and care of the elderly are examples of industries lacking competition.

What are the JEI University’s experiences of innovation that you can share with other community colleges across the country?

I emphasize the wisdom of penguins. Penguins live in the South Pole and survive in the intense cold with temperatures of 50 degrees below zero Celsius (58 degrees below zero Fahrenheit) and snowstorms that have winds of 100 kilometers (62 miles) per hour. The penguins survive the bitter cold by sticking to each other and sharing their body heat. When the temperature of the penguin which is on the outside of the huddle drops, it changes with the one on the inside. We need to adopt that wisdom of huddling as well.

What do you think about the Ministry of Education’s higher education policy?

Last month, presidents of four-year universities and two-year colleges gathered together for the first time in history. The reason why is that they crossed a critical point due to a few reasons including the abolition of admission fees and the imposition of property tax on real estate owned by schools. The Ministry of Education has a lack of will to take away our sufferings and difficulties. Policies focusing on the actual situation are necessary.