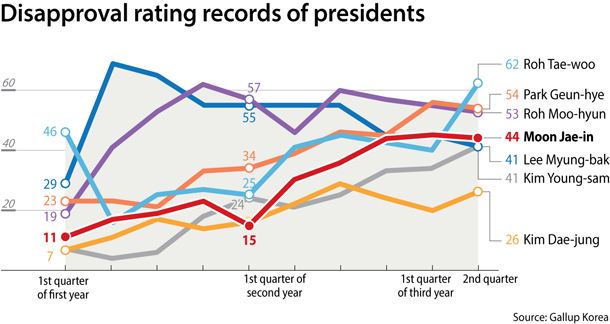 A recent poll showed Thursday that President Moon Jae-in’s approval rating has fallen to the lowest ever since he took office, while his disapproval rating was the highest it’s ever been.

The Realmeter polling company said it conducted a poll on 2,007 voters nationwide from Monday till Wednesday. The survey, commissioned by TBS, showed that Moon’s approval rating was 43.3 percent, down by 3.4 percentage points from the previous week.

It is the lowest approval rating since Moon took office in May 2017. According to the weekly poll by Realmeter, the lowest previous rating was 44.9 percent, recorded in the second week of March.

Realmeter analyzed that the all-time low approval rating showed the public’s discontent with Moon’s decision to appoint Cho Kuk as the justice minister, despite a series of suspicions surrounding him and his family. “As media continued to report about the prosecution’s investigations into Cho and his family, the rating fell,” it analyzed.

The poll showed that 53 percent of the public disapproved of Moon’s performance. The score is 3 percentage-points higher than the previous week and also the highest since he took office.

The survey had a 95 percent confidence level with a margin of error of plus or minus 2.2 percentage points.

Realmeter also asked respondents about their opinions on Cho’s appointment. According to a separate poll conducted Wednesday, 55.5 percent said Moon made the wrong decision to appoint Cho as the justice minister, while 35.3 percent said it was the right decision.

That poll had a 95 percent confidence level with a margin of error of plus or minus 4.4 percentage points.

Analysis by another polling company also showed that Moon, who started his presidency with the highest-ever approval rating of 81 percent, suffered a dramatic fall in public support as his term reaches its midpoint, following in his predecessors footsteps. t

Moon, who started his five-year presidency in May 2017, has maintained a relatively low disapproval rating. According to Gallup Korea’s polls on the public’s support on the performances of past presidents, Moon had a disapproval rating of about 30 percent until the third quarter of his second year, the lowest after presidents Kim Young-sam and Kim Dae-jung.

“Moon started his presidency at a unique moment following the impeachment of his predecessor,” said Jung Ji-yeon, a director of Gallup Korea. “Inter-Korean summits also helped him. Except for a few flops in appointments, there had been no particularly bad incident that would hurt the approval rating.”

But as his presidency reaches its half-point, Moon’s unusually high approval rating is rapidly falling. According to the recent survey by Gallup Korea, for Moon’s approval rating during the second quarter of the third year, 46 percent of people disapproved of Moon’s performance, while 46 percent approved.

Among the presidents who served a single five-year presidency, Moon’s score is situated in the middle. Roh Tae-woo recorded a disapproval rating of 62 percent during the second quarter of his third year, while Park Geun-hye scored 54 percent and Roh Moo-hyun 53 percent.

Kim Dae-jung scored 26 percent during the second quarter of his third year, while Kim Young-sam and Lee Myung-bak each scored 41 percent. Among the seven presidents, Moon’s disapproval rating was the fourth highest.

After his disapproval rating exceeded the 40 percent mark during the fourth quarter of his second year, scoring 44 percent, his rating has remained around that same level. Political observers said Moon, although he started his presidency with an 81 percent approval rating, is no exception from the pattern that a president starts to lose his or her control and approval rating in the third year.

Moon’s predecessor Park faced a leadership crisis during her third year. An outbreak of Middle East Respiratory Syndrome (MERS) during the second quarter of her third year and a political confrontation with her longtime ally Rep. Yoo Seong-min in July 2015 dealt blows to her leadership.

President Roh Moo-hyun also experienced a leadership crisis around the same time of his presidency. In June 2005, he proposed a grand coalition to the opposition party, which was rejected and also prompted him to lose his core supporters. In the by-elections in 2005, the ruling party was defeated in all 23 constituencies.

“In the political environment of Korea, where a president serves a single five-year term, all presidents experience drastic falls in their popularity when they hit mid-term,” Jung said.

While the falling approval rating in the recent weekly polls was attributed to the scandal involving Justice Minister Cho, Jung said that is not the only reason.

“In the case of Moon, the public sentiment started to change during the fourth quarter of his second year, although there was no particularly bad issue,” she continued. “The worsening economy appeared to have the largest impact. No matter how the issue associated with Cho is concluded, it is, at the end of the day, all about making your ends meet. The general flow of the public sentiment will show the general evaluation of economy.”