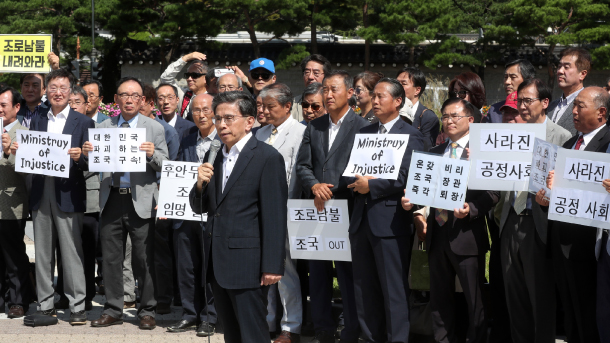 A group of former and current professors from across the nation rally in front of the Blue House in central Seoul on Thursday to urge the president to fire Justice Minister Cho Kuk. [KANG JUNG-HYUN]

A group of former and current professors from across the country gathered in front of the Blue House in central Seoul on Thursday to denounce President Moon Jae-in’s appointment of Cho Kuk as justice minister, saying their signature drive has been joined by over 3,000 professors from at least 290 universities in less than a week since it kicked off.

But the organization, whose name in English roughly translates as “the group of national professors hoping for social justice,” said they would postpone their plan to reveal the professors’ names and affiliations until next week due to a “cyber terror attack.”

The group said some unidentified people were logging into the website where the petition is posted and uploading false names of professors and universities, prompting the organizers to verify every single professor on the list to confirm they did actually sign, using their email addresses and phone numbers to contact them.

“We’re checking every single person on the list because even if there’s one signature that later turns out to be false, it can cause serious trouble,” said Prof. Lee Sam-hyeon of Yonsei University in western Seoul. “Some people are uploading random names like Professor Hong Gil-dong from the University of ABC.”

Prof. Lee Eun-joo of the Department of Oral Anatomy at Chonnam National University’s School of Dentistry in Gwangju said Thursday that the petition has garnered 3,396 signatures from professors at 290 universities in just six days since it launched.

The group expected the figures to rise, as this week’s press conference in front of the Blue House was meant to announce the mid-term progress of their initiative to oust Cho from the Ministry of Justice.

Choi Won-mog, a law professor at Ewha Womans University in Seoul, raised the fact that his colleague was fired for pulling strings to allow Choi Soon-sil’s daughter, Chung Yoo-ra, to gain admission to the school in 2015. The so-called Choi Soon-sil-gate ultimately led to former President Park Geun-hye’s impeachment in 2017.

“A person who worked in the same school as me as the admissions chief received a year-and-a-half jail term for saying ‘I hope we choose the student who won a medal in the Asian Games,’ and he also got fired from the university,” said Prof. Choi. “This happened when Cho Kuk was the presidential senior secretary for civil affairs.”

Prof. Choi said he supports the administration’s judicial reform but thinks Justice Minister Cho should resign from all his public posts and President Moon should apologize to the public.

“President Moon needs to be a successful president. I beg him to make a decision on the recent scandal,” Min said.

Prof. Kim Sung-jin of Korean literature in classical Chinese at Pusan National University, where Minister Cho’s daughter studies medicine, said President Moon should fire Cho and force him to apologize to the public. Kim accused the president of having “infringed upon the constitutional order of Korea” by appointing Cho as justice minister.

Prosecutors are currently investigating a plethora of allegations against Minister Cho and his family, including suspicious investments made by Cho’s wife and his two children and a major admissions scandal on the part of Cho’s daughter. Cho’s wife, an English professor at Dongyang University in Yeongju, North Gyeongsang, was indicted last week for fabricating documents to help her daughter get into medical school.