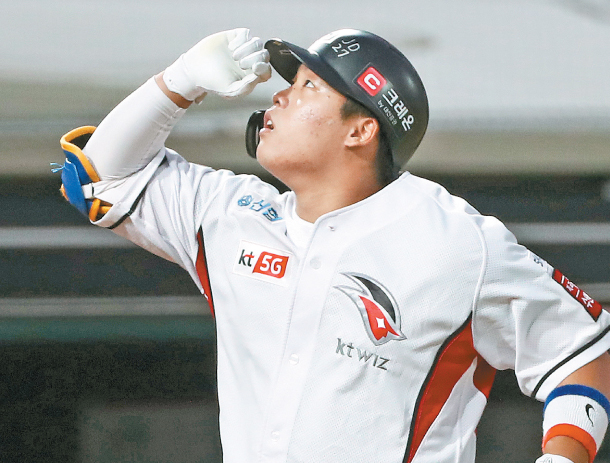 Kang Baek-ho of the KT Wiz celebrates after hitting a home run during a game against the Kiwoom Heroes at KT Wiz Park on Aug. 20. [YONHAP]

After a headline-stealing debut last year, Kang Baek-ho of the KT Wiz cemented his status as one of the KBO’s hottest players in his sophomore season.

Having joined the KBO after an outstanding high school career as an all-around player in 2018, Kang started his professional career with a home run in his debut at-bat. Last season, Kang hit 29 home runs, good enough to set a new record for a high school graduate rookie. His performance also won him the Rookie of the Year award.

Kang didn’t slow down in his second season. As of Thursday, Kang has a 0.342 batting average. Although his statistics have gotten a lot better, his season hasn’t been all smooth sailing.

Kang suffered a major hand injury this season. Due to this, he had to undergo surgery and skipped the entire month of July. When he returned in August, he had to change his grip to make it less painful.

He also briefly made headlines for his attitude during a game against the Lotte Giants on Aug. 13. When he hit a foul ball against pitcher Kim Won-jung, Kang yelled at himself so loudly that Kim also reacted to his attitude.

While this angered some fans, others encouraged Kang’s behavior as it showed how competitive he is.

Despite the issues, Kang still held on to that 0.342 batting average with 13 home runs and 62 RBIs.

Below are edited excerpts from an Ilgan Sports interview with Kang.

Q. You’re almost done with your second season already. What do you think about your season in general?

A. The 2019 season went by quickly. A lot happened. I played as a right fielder and a center fielder. I also suffered a major injury for the first time. There were things I did wrong, and there were plays that I was very satisfied with, but I also struggled. More than anything, I was happy about KT winning more than last year. I was happy that there were more days that the fans could go home smiling. I’m gaining experience so I want to add meaning to the time I’ve spent playing.

What improved compared to your rookie season?

My first goal was to adjust to my new spot in the batting order, moving from first to third, this season. I wanted to help [the Wiz] improve its offense. Honestly, I was very inexperienced. But every time I failed, I learned something. There were areas I complimented myself on. I consider them steps toward me getting better.

Are you satisfied with your statistics this season?

You’ve been a star player since high school, and you won the Rookie of the Year award. Looking at your career, you’ve only had success. How do you feel?

I feel grateful about many things. I had great timing and was lucky. But I don’t think it’s only been a smooth road.

Why do you think that?

When I was younger, I’ve had a lot of difficulty. It’s hard to talk about it because it’s a family issue, but I had to transfer schools often.
During that process, I had a hard time adjusting to new environments. Even when I played baseball, I struggled the most during the most important time. I hated playing baseball during third grade in high school.

You’ve been receiving attention since first grade of elementary school. How did you feel about all the attention when you were growing up?

I’m very careful to talk about it. I had a lot of pressure because I played baseball with other people’s perspective of “you’ll be successful.” I had conflict with my parents about my career because my father looked for a bigger stage, while I wanted to play in the KBO. At the beginning of third grade [in high school], I played so bad that all those concerns seemed meaningless. Thankfully, I got my thoughts together for the national tournament in July and saw good results. But that pressure continued on the professional stage.

You’ve had two short slumps in your KBO career. How did you feel during that time?

I received the spotlight for hitting a home run in my debut at-bat. But I quickly had a slump, and as it got longer, I lost confidence. I still feel pressured in defense, but I’ve been told that I can become a better player if I get through that. I persevered by learning and finding enlightenment. Making a professional debut and joining a great team is a great accomplishment, but it wasn’t all plain sailing.

It’s a different problem. I couldn’t be generous to myself. Since I was little, my father wasn’t used to compliments. When I was in elementary school, he wanted me to start thinking about middle school, and in middle school he wanted me to look at high schools because there is always a bigger stage even if I’m satisfied. And professional leagues are just like that.

The majority of the players I bat against are older than me by 12 years or so. They don’t just throw fastballs at me because I’m a rookie. Everyone competes to be on the roster and to get in the starting lineup. I don’t think it’s right to have different standards.

When you made your professional debut, you received more attention as a new face in the KBO. Were you aware of that?

I was very well aware. I came out of nowhere so I became an issue. I am thankful for that attention. I gain confidence when I play the baseball fans want. But to be recognized as a better player, I need to move past being labeled as a young player.

Playing for another year doesn’t mean you become a more mature player. But thankfully, it looks like there are a lot of players on your team you can look up to. How do you feel?

Yes, they all have different ways of taking care of their physical condition and knowledge on how to get through the long season and mental game. There are so many things I need to learn. A team requires those kind of veterans. A youthful spirit helps, but because young players aren’t as experienced, they are inconsistent. Each team needs a veteran who can balance that out. Our team has that.

Do you want to be like one of those players one day?

I don’t choose one player as my role model. I need to go my own way. But there are a lot of veteran players I look up to. They all have their strengths, and I set them as my example.

I definitely respect him. Right before my debut, I saw him at the awards ceremony during the winter. But I actually wanted to see him up close, with a uniform on. I was sad that he retired. When he visited KT’s spring training site in February, he encouraged me, but I was disappointed that we didn’t get to have a long conversation.

The Wiz’s captain Yoo Han-joon is another respected player. What are your thoughts on Yoo?

I’m in my early 20s and I feel tired. I don’t know how he can play so well and have so much energy in his late 30s.

How do you imagine yourself in 20 years?

I try not to forget about veteran players’ strengths. I also want to become a player who young players respect. I don’t know how much longer I’ll play baseball because there’s a lot of time until then. But I want to experience everything a baseball player can enjoy. I think all players set their goal as becoming the best.

Some people would say the difference between stars and superstars is performance at international events. The final entry for the Tokyo Olympics will be announced next month. How do you feel about getting selected?

If I get selected onto the senior national team, I feel like I will have more responsibility. Of course one day I want to become the center of the national team. But right now, there are great veterans. Compared to them, I still have a long way to go. I’m not obsessed with the thought that I have to be in the starting lineup.

Do you plan on heading to the United States?

What are your challenges right now?

Over the coming winter, I hope to build a stronger body.

Do you also think about your actions outside of the stadium?

Of course. I’m thankful for all the attention I’ve received thanks to baseball’s popularity. But some parts of me also want to find happiness, outside of baseball. I’ll always be careful about my actions, but since I don’t drink, I don’t think I’ll make that many mistakes.

There was some criticism of your attitude recently. How did you feel about the incident?

I may seem rude, and I know that it can make some people feel uncomfortable. There are people who are looking at it positively by saying that I look confident, so I don’t want to disappoint those fans. Honestly, I’ve been trying hard not to show my competitiveness for a long time, even before that incident at Sajik Baseball Stadium. I’m trying to be more careful, keeping in mind that it can be viewed negatively by the fans.

How do you imagine your ideal future?

I don’t want to retire because I have to. I want to choose to leave even when the fans don’t want me to. But of course, that’s just my dream.