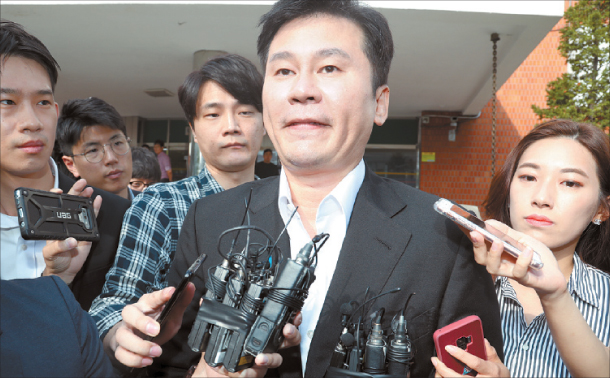 Police found no evidence of Yang Hyun-suk’s alleged solicitation of sex services and handed the case over to prosecution, said the police on Friday.

“We will be referring Yang’s case to prosecution with the suggestion of non-indictment,” an official from the National Police Agency said on Friday.

Yang, the former head of YG Entertainment, was accused of soliciting sex services for foreign investors in July and September 2014 in Seoul.

Yet, according to the police, they found no “objective evidence” to prove that he had solicited sex services, after looking into various records such as financial transactions and testimonies.

“We received no testimony that there was sexual intercourse [between the women and the foreign investors],” police said.

Yang was also accused of traveling with 10 women in October 2014 and paying them for services.

But police also concluded that “it was legally hard to say that the money was paid as a price for sex services,” regardless of the fact that sexual intercourse took place.

Yang is also under suspicion of illegal gambling abroad and threatening a former trainee in relation to an alleged drug case for Kim Han-bin, a former member of boy band iKON of YG Entertainment.