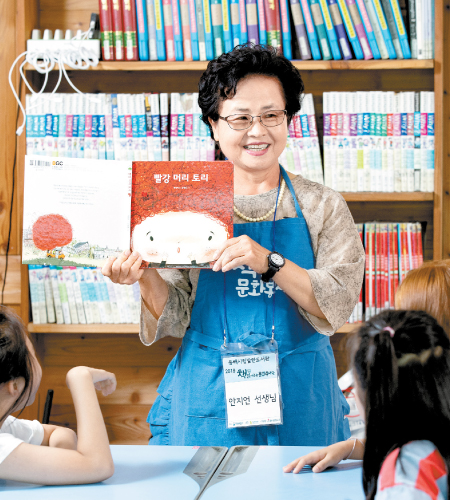 Ahn Ji-eon may be in her mid-60s, but she spends her time with people much, much younger than her.

She works in a municipal library in Donghae, a small city in Gangwon probably best known for its naval base. The population has dwindled to just 90,000 in recent years, most likely due to a lack of businesses in the area.

As children grow older, parents venture out to bigger cities to benefit from more established education facilities, leaving children from poorer, multicultural and single-parent families behind in a lacking environment.

Lee Hyun-young, the head of a local child care center in Donghae, said a lot of children who attend programs at the facility are behind in terms of their education.

In a bid to help these kids catch up, Ahn visits the center every Thursday. She is participating in a project hosted by the Publication Industry Promotion Agency of Korea, where people over the age of 50 volunteer to read to children.

“Besides being with the children, I have gotten a lot of things from [my volunteer work],” said Ahn. “I only regret having been unable to read to my own children as they were growing up.”

Ahn said she wanted to ingrain into the children good characters by reading good books to them.

However, she notes the challenges of reading to children, who are not known for their lengthy attention spans. Ahn asks her little listeners questions or uses picture books to keep them focused and says these are some of the best tricks she’s learned during her time volunteering.

Questions like “Isn’t this so?” or “Do you think they shouldn’t have done that?” help convey the story better while keeping the children focused, said Ahn.

Ahn has been reading to people for seven years. Her journey started in 2013 when she took a storytelling class from a lifelong learning center in Donghae.

The group that she is part of under the Publication Industry Promotion Agency of Korea created its reading program in 2014 to utilize seniors in Korea’s aging society.

“There are several similar programs run by each local government like the silver reading sharing program, [a book reading program for the elderly], in Gyeonggi,” said Lee Song-eun, the chairman of the board of directors of the Korean Association of Book Play Instructors, the organization which designed the volunteer system and trains those taking part.

“The readers’ volunteer groups, mostly made up of women, receive a small amount of money for reading at children and senior facilities. In this sense, I think the project creates jobs as well.”