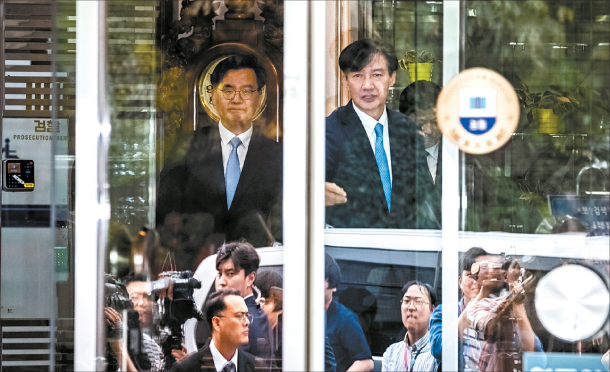 Prosecutors are investigating whether Justice Minister Cho Kuk was involved with a controversial private equity fund invested in by his family until a few weeks ago.

Cho claimed earlier that he had no knowledge of the investments because they were in a “blind trust.”

The prosecution has confirmed that Cho received an asset management report from Co-link Private Equity after he was nominated to become justice minister on Aug. 9, and before he was formally appointed to the post on Sept. 9. According to sources familiar with the investigation, Cho received the report in person at his residence.

The prosecution also obtained testimony from a Co-link Private Equity official that the report delivered to Cho did not describe the investments as being in a blind trust.

A later version of the report did include a blind trust clause, but that was only after Cho’s wife Chung Kyung-sim requested the company to add it, the fund official told prosecutors.

The prosecution suspects that Cho, in cooperation with Chung, was responsible for the revision of the report.

Ever since his nomination, Cho has denied any knowledge of the investments made by his wife and two children. During an 11-hour-long press conference and a later National Assembly confirmation hearing, Cho consistently argued that he had not known about the specifics of the asset management because it was in a blind trust.

The prosecution said it will soon summon Chung to be questioned about the investment. Chung did not reply to the JoongAng Ilbo’s request for comments.

Prosecutors have been investigating Co-link Private Equity, suspecting that Cho’s relatives are the actual owner of the company. Cho’s wife and two children invested a total of 1.05 billion won ($883,021) in a fund managed by Co-Link, named Blue Core Value-Up 1. The fund also received investments from Cho’s brother-in-law and two nephews.

The fund invested most of the money in Wellscnt, a tiny technology company, in mid-2017, when Cho was a senior secretary for civil affairs at the Blue House. Soon after, Wellscnt’s performance started to take off as it landed deals with a number of local government offices and public companies.

High-level civil servants are required to register with the government the amount of their wealth every year. Clause 2 of Article 24 of the Public Service Ethics Act says it is a crime if a public servant fails to sell stock or place it in a blind trust without justifiable reason. The crime can be punished by a jail term of up to one year or a fine of up to 10 million won.

Under Clause 4 of Article 14 of the same act, spouses of senior public servants are barred from making direct investments.

The prosecution suspects that Co-link Private Equity was not a blind trust. Prosecutors are now looking into the possibility that Cho knew about the specifics of the fund’s investments.

“The prosecution must prove that Cho had been actively involved in the selection of companies the private equity fund invested in, going beyond whether he knows about the specifics of the investment or not,” said a lawmaker who is a former senior prosecutor of a special investigation unit. “Unless they obtain evidence or testimony to prove Cho’s active involvement, it won’t be easy to prosecute him.”

The prosecution is also considering the possibility of indicting Cho and Chung as co-conspirators for ordering evidence destruction, sources told the JoongAng Ilbo. A private assets manager of Korea Investment and Securities, who managed the Cho family’s assets, recently told the prosecution that he had personally met Cho when he replaced a hard disk of a computer in Cho’s house. The asset manager, only identified as Kim, said Cho thanked him for the help.

The prosecution summoned Kim for a sixth round of questioning on Wednesday.

The prosecution also raided an auto component maker, Iksung, as part of its investigation into the private equity fund. The company was the first firm that Co-link Private Equity chose to invest in.

The headquarters of Iksung, located in North Chungcheong, and the residences of the company’s chairman and vice president were raided.

Because the secondary cell industry was promoted by the Moon Jae-in administration, the investments have raised suspicions about a conflict of interest involving Cho.

Meanwhile, Cho visited the Euijeongbu District Prosecutors’ Office in northern Gyeonggi to have a roundtable talk with about 20 prosecutors and investigators on Friday. According to the Justice Ministry, Cho will tour district prosecution offices around the nation to hold a series of talks with prosecutors.