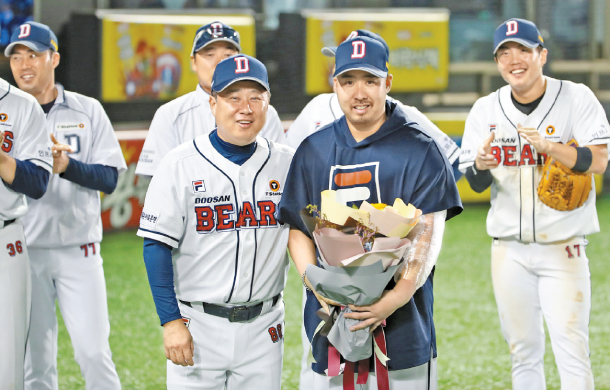 Doosan Bears pitcher Yoo Hee-kwan, right, celebrates his 10th win of the season with his teammates and manager Kim Tae-hyung, left, after the game against the Kia Tigers at Jamsil Baseball Stadium in southern Seoul on Friday. [YONHAP]

By picking up a win against the Kia Tigers on Friday, Yoo reached his 10th win of the season for a seventh consecutive year. Throughout seven and two thirds of an inning, Yoo gave up five hits while giving up a run and striking out five.

Although 10 wins may not seem like a big number, doing it for seven straight seasons is quite an achievement. Among left-handed pitchers in the KBO, Yoo is only the fourth ever to do so. For the Bears, Yoo is the second left-handed pitcher to hit the record, after Jang Won-jun, who reached eight seasons between 2008 and 2017 while playing for the Lotte Giants and the Bears. Yoo played all seven seasons for the Bears.

Yoo’s achievement is a lot more impressive as he throws the slowest pitches in the KBO. His fastest ball averages in the high 120-kilometer-per-hour (74.6 mile-per-hour) range. Despite the slow pitches, Yoo has been one of the most consistent pitchers in the KBO.

He had the worst season of his career last year, finishing with a 6.70 ERA. He still managed to pick up 10 wins, but also 10 losses. Following a disappointing 2018 season, Yoo was on the verge of losing his spot in the starting rotation but he successfully earned it following his performance in spring training and is having the best season of his career in terms of ERA.

This season, Yoo has tossed two complete games - against the Samsung Lions on May 16 and against the Kia Tigers on Sept. 13.