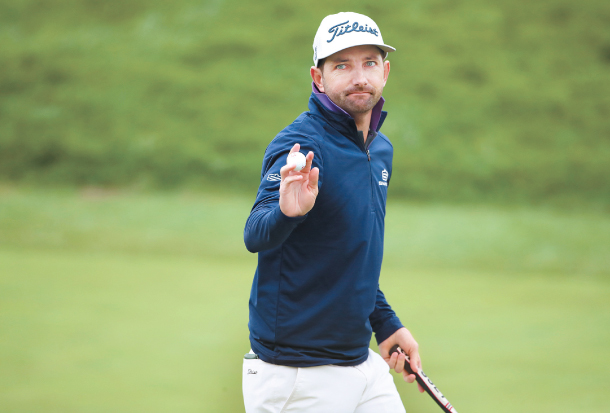 Jbe’ Kruger of South Africa greets fans after making a birdie during the final round of the 35th Shinhan Donghae Open at Bear’s Best CheongNa Golf Club in Incheon on Sunday. [YONHAP]

The final round of the tournament started two hours earlier than scheduled due to Typhoon Tapah. Despite the strong winds, Kruger, who started the final round two shots behind leader Scott Vincent of Zimbabwe, got off to a quick start with a birdie on the par-5 second. With back-to-back birdies on the seventh and eighth holes, Kruger tied for the lead with Vincent.

Shortly after, as Vincent made a bogey on the par-4, Kruger became sole leader. Once Kruger added a birdie on the par-4 11th, Chan Kim of the United States started to move up by making four birdies in the back nine.

Kruger rallied and once again extended his lead by two with back-to-back birdies on the par-4 15th and the par-4 16th.

With the win, Kruger took home the total prize money of 216 million won ($181,000). In addition to the win, as this tournament was jointly hosted with the Asian Tour, KPGA and the Japan Golf Tour Organization (JGTO), a win allowed Kruger to earn a five-year status card onto the KPGA Tour and a two-year full-time status card on the Asian Tour and JGTO.

Kruger became the first non-Korean player in three years to win the Shinhan Donghae Open. Before Kruger, Gaganjeet Bhullar of India won the tournament in 2016.

Having won two more tournaments on the Sunshine Tour in 2014 and in 2017, Kruger finally picked up his second Asian Tour victory on Sunday, for the first time in seven seasons.

Kruger’s victory is a lot more dramatic as he was on the verge of losing his Asian Tour status card. Before the Shinhan Donghae Open, Kruger was ranked 95th on the money ranking but a win allowed him to make a big jump in the standing, as he is now ranked eighth.

Kang, who picked up his first PGA Tour victory in May, hoped to pick up a win on the KPGA Tour for the first time since 2013 this weekend, but a tee shot miss on the par-4 11th took away his chance. Kang recorded his first bogey of the round by hitting his tee shot on the par-4 11th out of bounds. Although he made up for it by making a birdie on the par-3 12th, Kang wasn’t able to make his way up the leaderboard as he finished the rest of his rounds with pars.

The KPGA Tour will continue its season this week at the DGB Financial Group Daegu Gyeongbuk Open, starting from Thursday to Sept. 29.

While Kruger won this weekend’s KPGA Tour event, on the KLPGA Tour, Lim Hee-jeong defeated Kim Ji-hyun in a sudden-death playoff to win the All For You Renoma Championship 2019 at South Springs Country Club in Icheon on Sunday.

With a win, Lim took home the prize money of 160 million won and picked up her second win of the season.