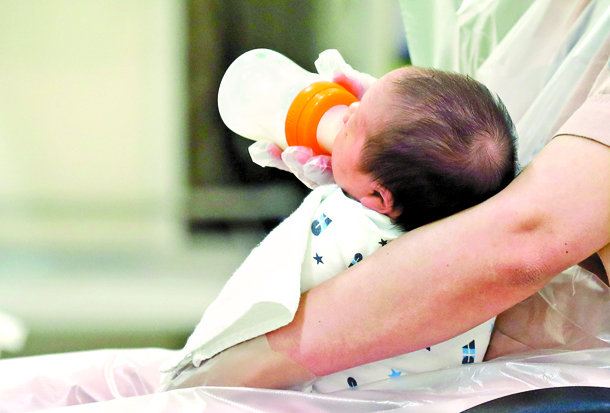 Cheil General Hospital & Women’s Healthcare Center, one of the most famous obstetrics and gynecology hospitals in the country, where chaebol families and celebrities are born and give birth, has been restructuring since January this year.

The hospital, which has been delivering newborns since 1966, as of last year is estimated to be in 128 billion won ($108 million) of debt, which quadrupled from 32.7 billion won a decade earlier. Loans borrowed from financial institutions alone have ballooned from 5.3 billion won to 95 billion won during the same period.

One of the biggest reasons behind troubles at the most respected maternity hospital in the country, which is on the verge of closing down, is the sharp drop in the number of pregnant women. The hospital, which delivered 6,808 newborns in 2012, only delivered 4,202 in 2018, a 38 percent drop.

Cheil isn’t the only maternity hospital that has faced trouble.

According to a report by the Health Insurance Review and Assessment Service released in March, the number of maternity hospitals has been steadily shrinking in recent years, the total falling 6.2 percent since 2013 to 1,311 as of 2018. Last year, 45 such hospitals were opened, but 53 closed down.

The financial holes in the balance sheets of hospitals like Cheil are just a reflection of the rapid changes in Korea’s population.

A recent report released by Statistics Korea earlier this month found that Korea’s total fertility rate as of last year dropped to a new record low despite the continuous efforts by the government since 2006.

Korea is currently the only country with a fertility rate below one , at 0.98, which means women aged between 15 and 49 are unlikely to have any kids.

The average fertility rate of Organisation for Economic Cooperation and Development member countries is 1.68.

This is a sharp drop from the one million recorded in 1970.

There are already growing concerns that this year, the number of newborns will drop to under 300,000.

“The total fertility rate being less than one in history only happened in Eastern Europe and in East Germany when the Soviet Union crumbled and the two Germanys were reunified,” said Lee Sang-lim, researcher at the Korea Institute for Health and Social Affairs. “There’s no precedent in the world where the fertility rate has dropped below one in a country the size of Korea without external impact like war or an economic crisis.”

Experts say under the current rate, the moment that the population in Korea declines could come much earlier than the previous forecast of 2028. The government projects the population after reaching 51.9 million a decade from now will decline to the level of 1982 - 39.3 million - by 2067.

As of last year, 89 areas on the peninsula are in danger of becoming ghost towns due to the rapidly aging population amid a significant drop in newborns, according to a study by the Korea Employment Information Service.

When looking at smaller villages, the number of neighborhoods declining in population has increased 7.9 percent in the five years through 2018.

Lee Sang-ho, a researcher at Korea Employment Information Service who wrote the report, stated that the extinction of neighborhoods is not only limited to rural areas but is spreading to larger cities.

“Recently, the areas in danger of being extinct are spreading to industrial cities and even to metropolitan cities,” Lee said in the report.

The rapid decline has alarmed the government.

“[Korea] faces grave structural changes to its population, more than any other country,” said Finance Minister Hong Nam-ki during a senior government meeting at the Government Complex in Sejong on Wednesday. “This means that we are nearing a significant problem that could worsen our economy’s growth potential and sustainable growth.”

Today’s population crisis is a stark contrast to the past when the Korean government implemented aggressive birth control policies between 1962 and 1994.

In the 1960s, the Park Chung Hee government pushed for policies that would reduce the number of newborns as the country was rebuilding from the ground up after the Korean War (1950-53).

The government pushed for a “3-3-35” policy, where families would only have a maximum of three children three years apart and only bear children until age 35. The public health centers even provided free vasectomies. Between 1962 and 1983, roughly 651,000 men were said to have undergone sterilization procedures.

One of the famous slogans said that a person would inevitably face poverty if making children recklessly.

But 32 years after, in 1994, the government stopped its birth control policies, including supplying free contraceptives, after the total fertility rate dropped to 1.56.

The government started to take notice of the shrinking population in 2005 and began to encourage people to bear children.

Over the last three years, the budget has been increasing around 3 trillion won annually.

The government policy on boosting fertility has been encouraging young people to get married and have children.

As such, the budgets from the central government have been focused on child support, free tuition, as well as housing finance for newlyweds.

The budget is even higher when including grants given by local governments to families that bear children.

When all is considered, the total budget in boosting the fertility rate is estimated to around 30 trillion won.

Couples having their first child receive 3.4 million won, and when having a second, the amount goes up to 14 million won.

For the third child, the total is 16 million won.

Currently there are two other places in the country that offer 30 million won for having a child - Yeonsu District in Incheon and Boryeong in South Chungcheong. However, both local governments only give the grant for a fifth child.

The biggest concern that the government has related to the shrinking population is the impact on the Korean economy.

This is a sharp drop considering that the central bank in 2017 targeted potential economic growth between 2.8 and 2.9 percent for the 2016 to 2020 period.

The International Monetary Fund for this year forecast Korea’s potential growth at 2.6 to 2.7 percent.

A drop to 1.9 percent would mean Korea’s economy will be grinding to a halt.

The National Budget Office estimated that at the current rate, by 2060, Korea would lose as much as 3.5 percent of economic growth.

Based on the 1.05 total fertility rate in 2017, by 2060, labor income will shrink 10.5 percent while capital income will fall 4.9 percent as a result of the shrinking working-age population and the rapidly increasing number of the elderly.

Experts say the current policy focuses heavily on government grants and subsidies in encouraging people to give birth. They believe the government should be more focused on the cultural changes that have taken place, especially social views.

A social welfare professor at Incheon National University said women in their late 20s and 30s have a lot of interest in equality, and as such, they are reluctant to get married.

A survey conducted by Statistics Korea found that 48 percent saw marriage as mandatory. This is a drop from 65 percent in 2010. Among unmarried men, only 36 percent thought so, while only 22 percent of women believed it to be the case.

Professor Song said grants given to encourage birth are meaningless. The government should focus on creating a system where women could be more economically secure.

“A system where women could work with stability in the labor market regardless of whether they have a child should be created,” Song said. “Wage discrimination between women and men in Korea is higher than in other countries. The environment for a single mother raising a child on her own is difficult because of society’s bias.”

Some of the experts say the government needs to change its policy, which is heavily reliant on handing out grants or child support, which are one-time solutions.

Instead the government should change the fundamental system.

“The reason the government until now has failed is because it is too focused on increasing the population,” said Kim Gi-bong, a history professor at Kyonggi University.

Some have argued that the government needs to maximize the use of the existing population or expand the number of foreigners in Korea.

One is Bank of Korea Governor Lee Ju-yeol.

Last year, Lee said the government should consider policies that would attract foreigners, especially in areas that require expertise.

“The policy encouraging birth takes time in normalizing the population,” Lee said during a hearing at the National Assembly.

“In between, we should consider policies to increase the economic participation of women and seniors as well as immigration, especially in specialized fields.”

The Korean government on Wednesday announced policies for maximizing the senior workforce by extending their employment while easing immigration rules.

The Korean business lobby group Federation of Korean Industries released a statement in June insisting that Korea should model itself after Sweden. The European country despite being a hyper-aged society since 2014 was able to grow 2.4 percent last year, faster than the average 2 percent of the 28 European Union countries.

FKI said that the success of Sweden was largely because the country tried to solve its problem by encouraging the labor participation of women and the elderly and also because of its acceptance of immigrants.