Industrial electricity use fell for the fourth straight month, hinting at a possible economic downturn. 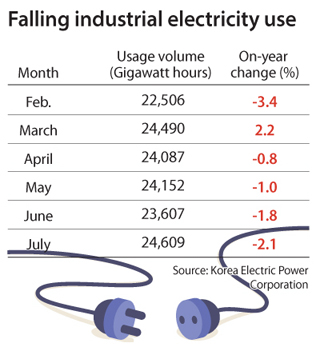 While industrial electricity use has declined before, the recent streak is significantly longer than those from the past. In most periods of decline, the duration of the fall is at most two months.

The recent fall is even more dramatic when the decline in February is added, meaning that electricity sales were down in five of six months.

In February, industrial electricity sales were 22,506 gigawatt hours, down 3.4 percent from a year earlier.

Demand for electricity, or its generated volume, often moves in line with GDP growth, and for that reason, many see it as a proxy for the economy. The long drop in industrial electricity use may signal a downturn in the economic growth rate or the start of a recession.

According to Statistics Korea, the number of manufacturing jobs fell 94,000 in July compared to a year earlier. The sector has been losing jobs for 16 consecutive months.

“Drop in electricity use for the manufacturing sector, which demands a lot of electricity in the work it does and is a major part of Korean economy, could mean that the economy is contracting,” a Kepco spokesperson said.

Hyundai Research Institute announced in a report earlier this month that it is lowering its growth projection for the country from its previous 2.5 percent estimate to 2.1 percent, citing slowing exports and weak domestic demand.

The think tank added it is possible that Korea has entered a recession, as the continuing diplomatic and economic feud with Japan is hurting overall investor sentiment.